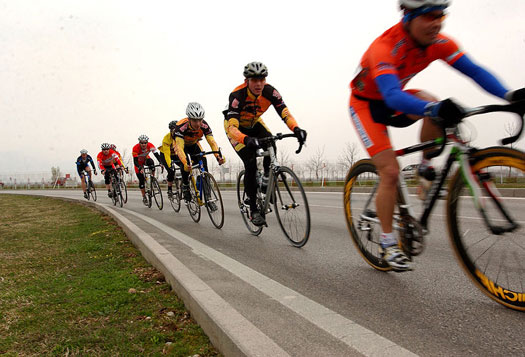 A paceline in nice, cool weather

A couple of weeks ago, the B ride from my club started 45 minutes ahead of the A group. Since we rode the same route, we had a chance to watch them pass by us while they were heading out to the turnaround.

The first six riders had formed a paceline, and what a sight they were! Really moving fast along a country road, and visibly putting distance between them and the less organized group following.

Paceline riding is something I haven’t done much. In the MS ride, I latched onto a couple of small lines, and found that I could keep up with them, but I only got to pull once. They quickly fell apart.

Apparently, most of the riders I encounter haven’t done a lot of paceline riding either. We tend to bunch up in clusters, rather than lines. Even in a bunch, there’s some wind blocking, but it’s nothing like it could be if we were in an organized line.

But then again, one thing I do know about pacelines is that you must be confident in your co-riders. If you don’t know how they’ll behave when you’re wheel-to-wheel, it’s probably not a good idea to form a line with them.

Watching the Tour has inspired me to try to get into some pacelines again. There’s plenty of info online about how to do it, such as this item from Examiner.com, a site featuring articles by experienced freelancers.

I’ll also bet a lot of Bike Noob readers know something about pacelines. How about sharing your insights on it? Let’s all get better together.