I remember the “bike fitting” I got when I bought my bike. The salesperson put the bike in a trainer, I put on my bike shoes, climbed on, and pedaled a little bit. Then she measured the angle of my knee when the pedal was at the bottom, made an adjustment to the seat, and told me the bike was “made for me.” There are better, albeit pricier, ways. Jeff Hemmel reviews one.

Bike fitting is part art, part science. Traditional fitting involves static measurements and some basic tools, like a plumb bob and ruler. My local shop sized me for my bike; later, another shop graciously fine-tuned things like cleat and seat position. Still, I never felt completely dialed in. Some of my issues may have been due to past injuries, including an ACL reconstruction and herniated disc. Others, however, were just my obsessive-compulsive wonderings, like why I never felt comfortable riding in the drops, or why my left leg often brushed the top tube. Eventually I went looking for an advanced bike fit. After all, even the priciest bike is no good if the owner doesn’t feel comfortable riding it.

Every shop seems to offer a name-brand fitting program nowadays. I chose Retül, a system that’s claim to fame is that it looks at a cyclist’s position dynamically, while the rider is actively pedaling. Small LED sensors are placed at key points of your body — wrist, elbow, shoulder, hip, knee, ankle, heel and the ball of the foot — and then a special motion-capture device tracks these positions in three-dimensional space as you pedal, relaying the info to a computer the fitter uses to analyze the data. In this way a fitter can analyze before and after positions, seeing just what works and what doesn’t as you actually ride, rather than sit stationary atop the bike.

“It’s better information,” explained experienced fitter Paul Williams, who conducted my personal fit at Clearwater, Florida’s Outspokin’ bicycle shop. “I can only make a rider’s position as good as I can with the information I have. The old-fashioned way was static, a tape measure and our ability to work with you to hold your body in the positions we were looking for. Now we don’t have to do that, we can measure you while you’re in motion, and it’s accurate, it’s repeatable.”

Williams began our two-hour session in a decidedly low-tech fashion. He asked about my riding style, experience and goals. He also brought up the subject of injuries or problem areas. Next I hopped up on a padded table, where Williams did a little bending and manipulating to get an idea of my flexibility and body mechanics. He then turned his attention to both my shoes and bike, setting everything — cleats, handlebars, seat, shift levers, etc — in a neutral position, from which we could then begin to tweak the bike to fit my body.

With everything set, the bike was locked in a trainer, I was bombarded with Velcro tabs for the various LEDs, and the LED-equipped wiring harness was attached to the left side of my body. After a good warm-up, Williams started recording the data. 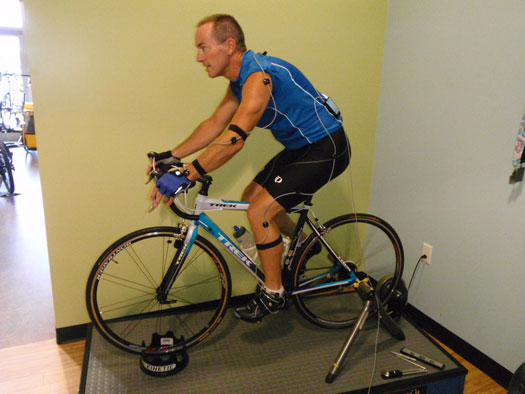 Every so often, we’d stop to make a change. Following each and every adjustment I’d once again start pedaling at a decent cadence, the improvement, or lack thereof, shown in the data being collected on Williams’ laptop. Many positions and angles had known “target” numbers Williams was trying to achieve for best results, and the computer could record how I measured up during repeated revolutions. Some changes were dramatic. My saddle was shifted rather substantially, and my stem was flipped from its former positive to a new negative angle. Others were rather subtle, like a small repositioning of a shift/brake lever or minor tweak in cleat position. The data being generated, however, displayed a quantifiable difference. Still, the information was just a tool. It took an experienced fitter like Williams to put it to best use.

Once everything seemed good, the platform my bike was loaded upon was spun 180 degrees, sensors repositioned on my right side, and the process started anew. Amazingly, I was quite symmetrical. Both Williams and I expected problems thanks to my knee complications on the left-hand side, but apparently I’ve done some self-correction. A tracing of my left knee from the front showed a more pronounced wobble than the right, but it was within limits. A few more subtle changes followed until both of us were satisfied with the results and I hopped off the bike.

“Every fit is different,” explained Williams as we looked over the results. “We’re just working with you, the athlete, to make this the best possible fit we can so you can enjoy your bike, not get injured, ride fast, and be aero. We’re trying to create the perfect storm of all those things.”

He next produced a very cool tool called the Zin, a wand-like device that essentially digitized my bike’s geometry into the Retül program, where it would be combined with my biomechanical fit data. As he touched the Zin to various points on my bike, a stick-figure representation was being formed on the computer’s screen. With the exact measurements of these reference points, I could now exactly reproduce my position should something get changed or I decide to experiment down the road. 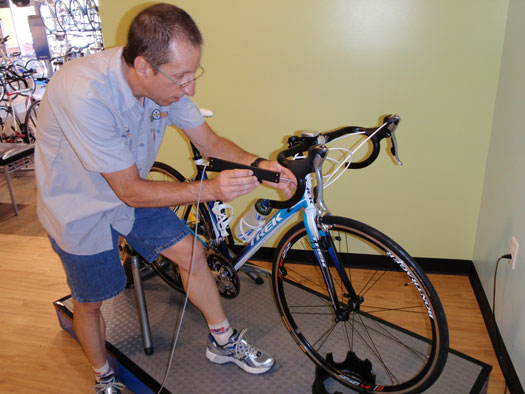 Paul Williams with the Zin.

The proof of the system’s value would be proven not in the shop, but on the road the following day. My primary concern was comfort. Everything felt good, with no pain or problem spots. I also felt faster and more efficient, a feeling that was verified during a familiar 30-mile ride. The most-welcome change was that I was now comfortable riding in the drops; before, I avoided it like the plague. The change gave me an additional option on the bike, letting me generate more power and be more aero when desired.

Like most advanced fittings, Retül isn’t cheap. Average cost is around $250 for a two-hour session. Most dealers slash that price with the purchase of a new bike. As to whether the investment makes sense for a noob, Williams offered a compelling argument, beyond simple comfort. “I would rather have a new rider go through the fit before they’ve acclimated to a poor position, so that you don’t have to unlearn bad habits,” he explained. “A good position can help you learn good habits. Your body will do what comes naturally if you just give it the opportunity.”

My final take? Retül doesn’t make the difference, a good, experienced fitter does. What Retül offers, however, is a quantifiable, real-world look at how you measure up on your bike. In that way, it just may be one of the best instruments currently in a fitter’s toolbox.

For more information on Retul, or to locate a Retul fitter in your area, visit www.retul.com.