The other day I asked Bike Noob readers to send their tire recommendations. This, after dealing with a couple of flats myself, and getting an email from a reader who has had a rash of flats. The question was, What tire do you recommend for puncture resistance?

While I was pleased with the responses, there were not enough to create a meaningful sample. However, of those who did respond, a clear trend emerged: Continental Gatorskins.

Riders praised Gatorskins for their ability to last many, many miles without flatting. Some suggested that Gatorskins aren’t as “nimble” feeling as other tires, but were willing to make that tradeoff to avoid flats.

The only other tire to get multiple mentions was another Continental model, the GP 4000S.

I put a Gatorskin on the rear wheel this week, after my experience with a warped tire (although I suspect the warping was the result of my hanging the tire in a hot garage for several months). No problems after 60 miles of riding, so I’m happy, but that’s not enough to come to any conclusions.

The only issue with Continental tires is their price. Gatorskins cost about $50 apiece, and the GP 4000S run more than that. However, their proponents seldom mentioned cost — I guess people are willing to pay if it means they have the peace of mind of not worrying about flatting. Sharp-eyed consumers can find bargains online, though. Jeff Hemmel says he paid $31 each for his GP 4000S tires at Pro Bike Kit (probikekit.com) with free shipping to the U.S.

Other tires that got favorable mentions from readers included Schwalbe Marathons and Specialized Armadillos (several for each), Maxxis Columbiere, and Michelin Lithions.

Reader Mike from California had high praise for his Lithions: 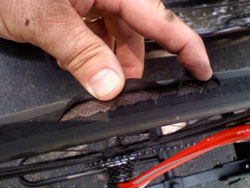 I am a heavy guy at 270+ lbs. and Lithions are all I will run. I rarely flat and the last one I replaced on the rear had over 1300 miles on it and had NEVER flatted, not once. It was still at pressure after a 40+ mile ride when I discovered that it was worn all the way around and the casing was beginning to peel.

Several readers mentioned the importance of good rim tape. It’s probably worthwhile to replace the stock rim tape on your wheels with some new stuff, and to replace it every three years or so.

Here’s wishing you a flat-free Fall.

(I noticed that no one is running the Hello Kitty tires pictured in the original post.)