A few weeks ago, I mentioned that I had a warped rear tire that may have been responsible for my broken front derailleur. At least, the tire — because of its bent shape — rubbed against the derailleur.

The derailleur was fixed, and the tire replaced. But now, here’s what the front tire looks like: 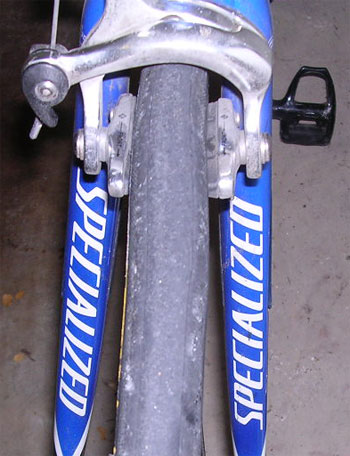 Remember, the other warped tire was on the rear. This is on the front. The warp is more obvious when it’s next to the brake.

I haven’t noticed any ill effects from riding on this thing. Last Sunday, it went on a 30-mile ride with no issues. It turns out that this was the tire I did the time trial on two weeks ago, too.

I suppose I should replace it, but there doesn’t seem to be any urgency to it.

So I’m trying to figure out what caused it.

The wheel appears to be true — it’s the tire itself that’s bent.

Some folks have suggested that it’s the way I mounted the tire on the wheel — but this tire has been on the wheel for quite awhile now, since February. The warp didn’t become obvious until quite recently.

Because of all the 100°+F (38°C) days we’ve had this summer, the garage where I keep the bike has been a broiler. I’m guessing late afternoon temperatures inside the closed-up garage were in the 120°F (48°C) range. I wonder if that had anything to do with it? The badly warped rear tire had been hanging from two hooks in the garage most of the summer, until I got it down to replace a tire that had a screw puncture it. I assume the hooks in the heat could have softened the rubber enough to warp it.

Maybe it’s the brand. These are Hutchinson Top Speed Pro Tech Kevlar (whew!) tires. The Hutchinsons are the only tires that have warped. Specialized, Vittoria, and Continentals have been fine.

So what do you think? Have you ever experienced this kind of thing? Should I replace the tire right away, even though it isn’t causing me any problems?

Oh, and before the snarky comments come in — I took the picture after our club ride last Sunday, and washed the bike later that evening.