This morning I decided to forego my usual Saturday morning ride to volunteer for the Kiker Bike Fest. This is the second year in a row that my club, the Circle C Ranch Cycling Club, sponsored the bike fest at Kiker Elementary School in southwest Austin. It’s a chance for kids to learn cycling skills and have some fun in the bargain.

Last year, the bike fest attracted about 300 kids from the area, and we expected that many or more this year. Stations are set up to fit kids with new helmets, do quick bike repairs, learn the correct way to start and stop, ride a tight figure 8, ride in traffic with correct hand signals, and even ride a mountain bike trail behind the school. 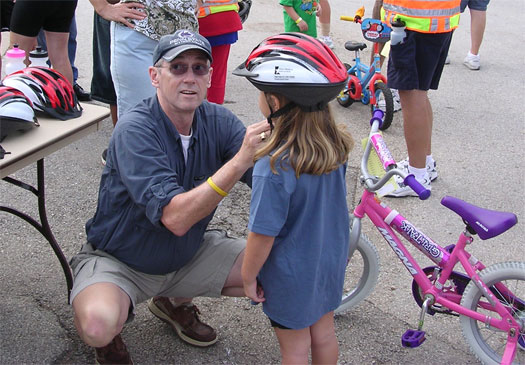 Joe, who leads our Sunday morning A group rides, fits a girl with a new helmet donated by the Texas Medical Association.

Pat and I handled the Straight Line – Scanning station. The kids had to ride a straight line between two chalk lines 18 inches apart. Then, we brought them back again to practice looking over their shoulders. Once they got halfway down the lines, I yelled “Look!” and they were supposed to look back, make eye contact with me, and continue. Because most of them were quite young, I did not point one way or another, as is usually done in this exercise, and they did not have to say which way I pointed. For many of them, staying upright on the slight downhill track was challenge enough.

It’s been awhile since we had kids at home, and both Pat and I were disconcerted to see how some parents hover over their children. One mother grabbed her little girl’s handlebars, and pulled her down the lines — nearly tipping her over several times.

But mostly, people seemed to enjoy the event. Parents liked how well organized the whole affair was, and many indicated they would be back again next year. 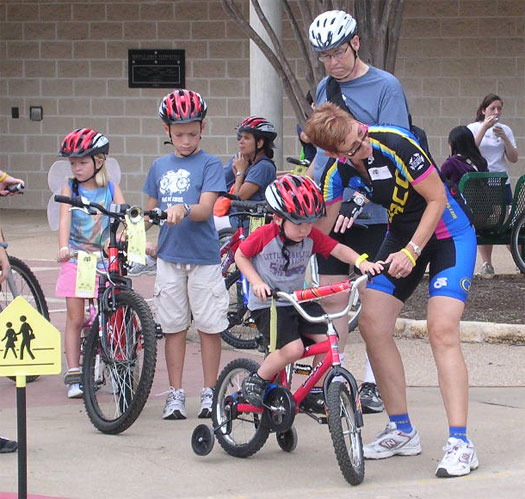 Debra gets a young rider rolling on the traffic safety course.

One highlight of the morning was a group ride on the nearby Veloway, led by former Tour de France racer (Motorola, Cofidis, U.S. Postal, Telekom) Kevin Livingston. This was assuredly not a hammerfest, as kids on BMX bikes jockeyed for position with their sometimes-wobbly parents and fully kitted-out weekend warriors. 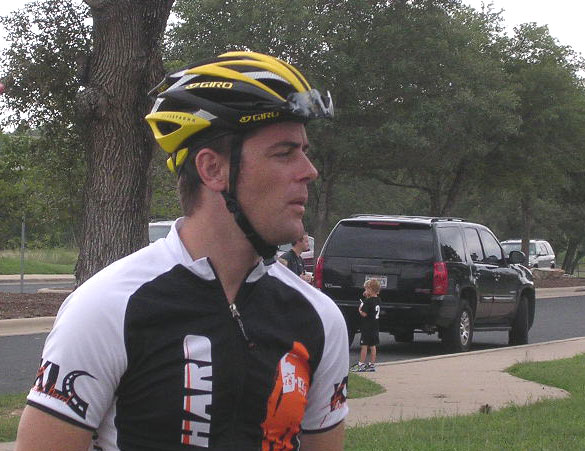 Kevin Livingston waits for the group ride to begin. 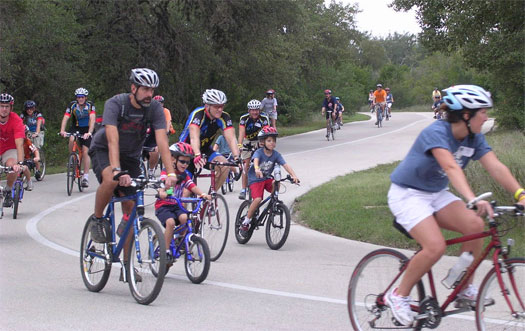 “Just to show you how committed I am to this,” said my friend David, “I’m missing ESPN Game Day — and it’s here in town.” Texas is playing Texas Tech today, so I guess that is a good barometer of club participation. Besides, the game isn’t until this evening. Cycling education AND football — now there’s how to spend a Saturday.