A couple of weeks ago, after I groused about my warped tire, my friend David suggested I come over and borrow one of his spare wheels. He recently bought them for his five-year-old Fuji, but then he decided to upgrade and got a new Giant Defy. So the Fuji and its almost-new wheels were not being used.

After the Bike Fest, I rode over to his house, and we swapped my front wheel for his. One of the first things he noticed was the feel of my old wheel. “Feel that?” he said. “When you spin it between your fingers, you can feel the grinding in there. This hub needs work.”

We tried the same test with his wheel, and it spun freely. It’s a Forte Titan — the Performance house brand, and appears to be the least expensive road wheel they offer. To top it off, it carried a new Continental Ultra Race tire with a Kevlar belt and a red tread. When mixed with the black and blue paint of my bike, it’s a striking look. 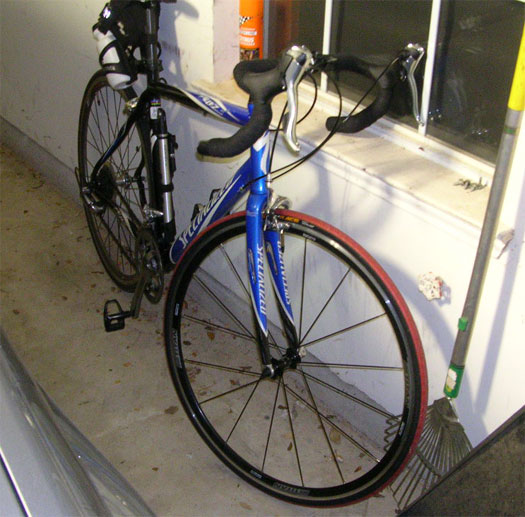 The Forte Titan stands out because of its black spokes, which are flat, and the red tire — which may not be to everyone’s taste.

I haven’t been riding as much lately as I did during the summer, so the new wheel has only been on two Sunday club rides. It seemed okay, although with a 23 mm tire, instead of the previous 25, it felt a tad twitchier. I figured I’d keep it until I had a chance to get my old wheel over to our club bike mechanic, and get his advice about the hub.

Then tonight came the last time trial of the season. I wanted to ride, since no official time was posted for the last TT. My previous best time was 24:10 and 20-something mph. I wanted to beat that tonight, and get my time under 24 minutes.

The ride seemed easy. In fact, I was concerned that I wouldn’t be able to beat my old time. I was well within my comfort zone for most of the ride. Over the last two miles, I pushed harder than I had during the first six.

Holy cow! My unofficial time was 23:02! I knocked a minute and eight seconds off my previous best. Speed was just a smidge over 21 mph. How was that possible? I’ve been riding less, I don’t “train” for rides like this, and honestly, I felt as though I’d left something out on the course. Sure, I rode hard. But I think I could have ridden harder.

Mrs. Noob nailed it: “No way you improved that much in three weeks,” she said. “It must be that new wheel.”