They say that the saddle is the most personal item of equipment on a bike, because every rider has different needs. This idea resurfaced during the “What saddle do you ride?” poll. There is no clear-cut winner. The results are notable mainly because of the wide variety of saddles that showed up.

Multiple votes went to three saddles: The Fizik Aliante, the Brooks Champion Flyer, and the Brooks B-17. Dave, from Round Rock, Texas, said of the Aliante, “I have been on a lot of saddles and this is the first one that I can train on regularly and keep my saddle sores manageable.” It’s a very different ride than the two from Brooks. These traditional models are leather, require a lengthy break-in time, and horror of horrors — the Champion Flyer is sprung! Jake said his Brooks Champion Flyer provides “more blood flow to the man bits than even a very lightly padded plastic saddle.” He also liked the springs, which smooth out the ride on his aluminum frame, but he admits the saddle is heavy.

The Fizik Aliante and the Brooks Champion Flyer.

Every other saddle in the poll got only one mention. But there are enough different kinds that I’ll bet we can all find something to try out.

More Brooks fans: the B-72 and the Swallow each got a vote. Selle Italia got votes for its Ceverlo, Turbo and Turbomatic models. The Fizik Arione, Specialized Avatar, and Bontrager Race Basic all checked in. 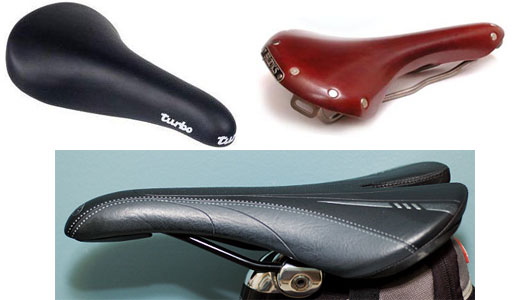 A couple of readers swore by tried-and-true mounts. Tracy likes his Terry Dragonfly, which Terry doesn’t make anymore. He says the closest seat to it is the currently popular Terry Fly Ti, but he can tell the difference between the two. John Z. likes his 1990s Vetta SP so much that after Vetta stopped making them, he scoured eBay for them, and now has a dozen. (I once bought multiple pairs of a model of running shoe I liked, because I knew when I was ready to replace it, it would be out of production.)

The Vetta SP and the Terry Dragonfly.

Some oddball models that made the list include the Selle SMP Strike, with its radically pointed-down nose, and the Koobi PRS, which we don’t hear much about, but which has a loyal following of users.

The SMP Strike and the Koobi PRS Alpha.

And finally — and this happens in every discussion of saddles I’ve ever seen — two readers urged us all to quit our whining about saddle discomfort and do what they did: Get a recumbent. You’ll sit on a seat, not a saddle. 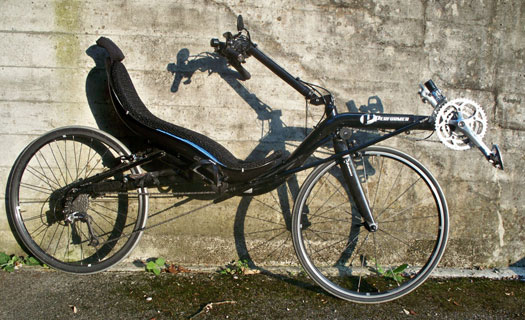 I don’t think I’m ready to take the leap. Yet.