On Saturday, my wife Pat and I were out in rural Texas, volunteering at the first Mamma Jamma ride for breast cancer research. The ride featured routes of 10, 27, 46, 70 and 100 miles. I was part of the route safety crew for the 46-mile route. I teamed up with another volunteer and sat at two intersections, directing riders to the correct route, and warning of any safety hazards up ahead.

So I was able to get a good look at a large number of riders. About an hour went by from the time the first group passed us until the last rider showed up. And I was once again perplexed that otherwise intelligent people seem to think they can ride a challenging distance like 46 miles without putting in the training miles beforehand.

Our first post was at 17 miles. As might be expected, those passing us for the first half hour or so looked almost fresh. The day was overcast, the temperature was stuck at 54 degrees, and there was almost no wind. But the forecast called for a high of around 70, and many of the riders were underdressed.

The fresh riders made the turn, and accelerated toward a nice downhill. But then, some slower riders started coming by. They labored up the slight rise to our location. Most were relieved to hear that the next rest stop was only six miles away. A few stopped, took a drink from their water bottles, or chewed on an energy bar.

Many of these slower riders were on hybrid or mountain bikes. They were pushing more weight than the road bike riders, which tired them faster. Some were on the chunky side. It was clear most of them didn’t realize what they were getting into when they signed up for the 46 miles.

I thought of an email from a reader that I received on Friday. She had signed up for a metric century, but had just learned through a Google search that she would be riding 62 miles.

“I am now officially nervous as I am not a regular rider,” she wrote.  “When I have ridden I think the most I have gone is like 10 miles.  I am not in cycle shape.  My bike is 18 years old.  I maybe get on the thing once every six months or so.”

Back at the Mamma Jamma, the last rider struggled up to our post. He rode an old non-suspended mountain bike, and several layers of cotton shirts. He was done. A SAG vehicle just happened to pull up at the same time. He asked for a ride back to the start. They told him they could take him to the next rest stop, but because he was less than halfway through the route, they couldn’t take him all the way back. 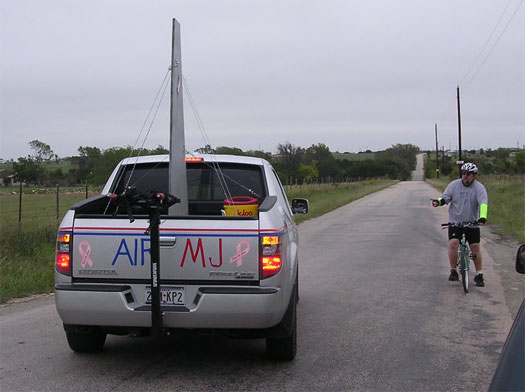 Rider tries to convince a SAG truck to take him back, just 17 miles into a 46-mile ride.

“We have to keep moving forward,” the driver said. “We could call for medical. They could bring you back.”

He wound up riding with them to the next rest stop, and called medical for a ride back from there.

Entered in the 46-miler, but unable to finish half that. What’s missing here? And my email correspondent? It turned out that her ride was Saturday, too — and she hadn’t prepared for it at all. I don’t know whether she finished — or even rode.

Evidently, biking just don’t get no respect. We all rode when we were kids; we know it’s a simple thing to pedal a bike along a road. Forty-six miles might be a more challenging distance than we have done in the past, but heck, just keep turning the pedals and you’ll be done in no time.

Folks, for any kind of physical challenge, you have to put in the time. I wonder how many of those ill-prepared riders won’t be back, because they’ve decided that biking is too tough. The rest of us know that they’ll be missing out on a fun and rewarding activity.