When I check my Bike Noob stats, one post keeps popping up among the most viewed of a given day — sometimes THE most viewed, even though it originally appeared way back in May. It’s the review I did of my saddle: the Selle San Marco Ponza. I’m pleased that folks looking for saddle info are finding this post and checking it out. But at the rate of eight to 10 times a day? Every day? Why?

You riders out there must really be sore in the nether regions. I can’t think of any other reason to keep searching out this review. So, to add to your information overload, I thought it would be appropriate to update the review, and see how I feel about the saddle now that I’ve had it for six months.

The San Marco Ponza is an inexpensive saddle found as standard equipment on some mid-range bikes, easily available by mail order or over the counter at bike shops. Compared to many standard equipment saddles, it’s a lot narrower, and looks like a racing saddle. 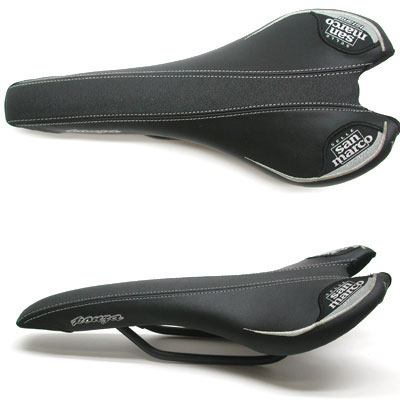 I am rapidly coming to the conclusion that the saddle is less of a factor than bike fit. A couple of weeks ago, while out riding, I noticed my knee was a bit forward. Later at home, I did the plumb bob test. The bob (in my case, a washer hung from a piece of twine) is supposed to land right over the pedal axle. Mine was too far forward. I moved the seat back a little bit.

The next day, on our club ride, the saddle bothered me more than it had recently. Apparently, my bum had gotten used to the forward riding position. But it’s where all the bike fit experts say it should be now. I figured it would just take some getting used to.

But when I went out again two days later, I didn’t even notice the saddle under my bum. I concentrated on cadence on that ride, and never once experienced any discomfort.  The same thing happened Friday, and Saturday, and on a 40-mile ride last Sunday morning.

As I said in my earlier review of the saddle, I like its narrow profile. It’s just wide enough that my sit bones perch atop the saddle wings, but narrow enough that there is no chafing whatever. A slight upsweep at the back cradles my butt in the seat. I can easily shift positions forward and back, depending upon whether I’m climbing, descending, or pushing hard on the flats. The stitched San Marco logo, which is slightly raised above the surface of the seat, hasn’t caused any chafing of my butt, but lately I’ve noticed that several of my shorts are developing a rough spot where they contact the embroidery. We’ll see if that gets any worse with time.

And the beauty of it all — it’s relatively inexpensive for a nice saddle. You can find the new Ponza Lux model (a little more padding) for about $25.

So, should you rush out and buy a Ponza? I’m not making any recommendations. Saddle fit is too personal an issue. Many shops offer a tryout period for saddles — see what the policy is as your shop, and give it a test ride. Just be sure to do a quick fitting first.