I decided to ride with the B’s this morning, even though I’m not fully recovered from last Sunday’s crash. But I felt pretty good on a 15-mile jaunt with my wife yesterday, and we were scheduled to ride one of my favorite routes today.

I headed out to Dripping Springs, a town of about 1500 15 miles west of Austin. We meet up at a park on the west end of town, where a circle drive makes a great place to park our cars and get ready for the ride.

The weather must have kept people away today. It’s autumn in Central Texas, and still quite mild. The temperature was in the high 60s (19-20C), but it was heavily overcast. Rain was forecast for later in the day. I figured some folks thought it would come early.

Four of us headed out at 9 a.m.  We maintained an easy pace, taking the small hills as they came. No one tried to race — not that the others would have chased, anyway. 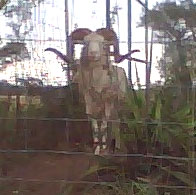 Lots of ranchers in this area keep goats, and we passed several herds. At one road intersection though, I saw a couple of guys who apparently had had enough of watching over their nannies and kids. They came close to a fence along the road, and stood as still as statues while I clicked away with my crappy cell phone camera. 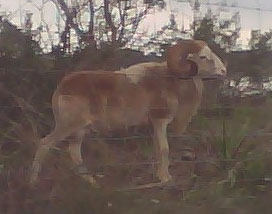 I’ve never really noticed the bucks before. These guys were something special, and I lingered a little to watch them. Then I had to get back on the bike and hustle to catch up with the others.

I didn’t have to press too hard, because one of the group, Duke, had to stop for some roadside servicing. His last bike, a nice tri bike, got a cracked frame, so his bike shop replaced it. He decided he didn’t like the feel of the tri, so asked for a comparable road bike, and he’s still getting used to it. This time, he felt he had to move the seat back a little, since he could see the hub of the front wheel while riding in a normal position. That was fine with us. We’re the B ride, after all, and any excuse for a rest stop is welcomed.

None of us has been riding much lately — the return to standard time has eliminated our evening weekday rides, so weekends are all we have to get some riding time in.

A bit farther on from this point comes one of the more interesting scenes on the route — a ghost bike. I’ve noticed it on several past rides in the area. A little research turned up the information that the ghost bike is in remembrance of Adam Raymond, who was hit head-on by a pickup truck that was driving on the wrong side of the road. The county DA was unable to get an indictment against the driver for criminally negligent homicide, but did get a conviction in February of this year for reckless driving. The driver got two years probation.

Cyclists like these roads because of the scenery and the varied terrain. Motor traffic is generally light, because this is not a heavily populated area. The ranchers who live around here seem to be used to bikers — I’ve experienced very few incidents of drivers passing too close, honking, flipping the bird, etc. But I’m reminded when we get too accustomed to riding three or four abreast that people do use these roads to get back and forth from their homes, and we have an obligation to ride safely.  The slogan, “Share the Road,” becomes more poignant when a ghost bike is around.

We finished 33 miles in 2 hours, 24 minutes, for an average speed of about 13.7 mph. By now, the temperature was up to 74 (23C), but the rains never materialized. These are the days you wish autumn would stick around forever.