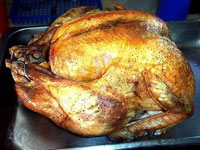 It’s close upon us — the big Christmas dinner, usually featuring turkey with all the trimmings. And we all know what turkey brings to our bloodstream: tryptophan. That’s an amino acid that flows through your blood vessels to the brain, where it’s converted to serotonin, which is blamed for inducing the post-feast drowsiness that results in nap time after dinner.

But maybe you’ve had the experience of finishing a long and/or strenuous bike ride. It might be nothing out of the ordinary given your level of fitness. Still, a little while after the ride, a wave of drowsiness comes over you. You make your way to the bedroom and flop. And you’re out cold for two or three hours.

It turns out that the poor turkey gets a bum rap for our sleepiness after dinner. Tryptophan is found in most proteins, so it’s not the turkey. It’s the amount of protein we ingest.

That’s why we munch on energy bars and gulp exercise drinks during rides. The muscles use the carbs as fuel, and in turn that cuts down the amount of tryptophan that can make it to the brain.

My ride the other day was a perfect example. I rode 25 miles, a distance I’m used to, although I don’t do it more than twice a week, and I felt pretty good. I carried one water bottle, and it was nearly drained when I pulled up to the house after the ride. But sure enough, while watching TV after my shower, I dozed off. I awoke just long enough to get to bed and zonk out for two hours.

During the ride, my body was using fatty acids — including tryptophan — for fuel. I just drank water, so I wasn’t doing anything to inhibit the tryptophan from getting to the brain. If I had brought an energy bar, I’m certain I would have stayed awake longer.

So if you’re going to do any riding over the Christmas weekend, keep these hints in mind:

Following these steps not only will ward off fatigue during your ride, but keep you from napping — and missing Christmas activities with family or friends — once the ride is done.

Bike Noob will take a short break over Christmas, and we’ll be back next weekend. I wish the blessings of the season on everyone.