Recently, I blogged about the difficulty of finding information about non-serious bicycle crashes — the most common kind.

This morning, thanks to a link from An Old Guy on Two Wheels, I came across a web site called Bikewise. This isn’t your usual biking advocacy, biking avocation site. It’s all about cataloging bike crashes, hazards, and thefts to make biking safer. According to the site, “It’s estimated that 75% or more of all crashes go unreported. We believe that by gathering detailed information on how and why crashes happen, we’ll be able to ride smarter.”

Bikewise is based in the Seattle area, but accepts crash reports from all over the country. The biker submitting the report is asked to include information about the circumstances of the crash, road and weather conditions, and perhaps most importantly, lessons learned from the crash. 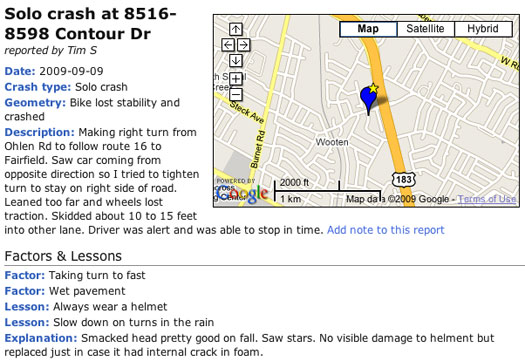 Bikewise lists local crashes, statewide crashes, and crashes from throughout the United States. It’s the start of an interesting and helpful database. It’s still pretty new, and the number of crashes it lists is small, even nationally. But as word gets out, I expect this will grow rapidly.