I was chatting with a friend about biking the other day, and he asked what rides I’d done lately.

“Well, yesterday I did the ‘technique’ ride,” I said.

He looked confused, and asked what I meant. I told him that once a week, I do a ride where I don’t worry about speed, or training, or endurance, but instead I try to improve my technique on the bike.

Lately, I’ve been concentrating on three things: cadence, pedaling in a circle, and cornering.

I used to work exclusively on cadence. When I ride the Veloway, I try to keep it at 90 rpm or above. That might mean I’m using some fairly easy gears on some stretches of the route, but that doesn’t matter. I’ve found that getting used to pedaling in a high cadence makes me faster, improves my endurance, and makes it easier for me to draw on my reserves if I’m starting to flag on a long ride. But recently, I’ve caught myself ignoring cadence, and mashing the pedals. I’ve gotten a little slower. So it’s time to get it back. Most of the time, I maintain my 90 cadence in the small ring. I can do it in some of the easier gears on the big ring, but by using the small ring, I don’t worry about my speed — just cranking those pedals fast enough.

When climbing hills, or pushing to catch up to the pack on the flat, I always try to remember to pull up on the pedals. That uses the big thigh muscles to generate power. But two summers ago, I discovered that pedaling in a circle accomplishes the same thing, and the process is much smoother. But it’s really easy to forget that, or to get lazy, and the next thing you know, you find yourself mashing down on the pedals, instead of applying power on the upstroke. So during the “technique” ride, I constantly check that I’m pedaling in a circle. 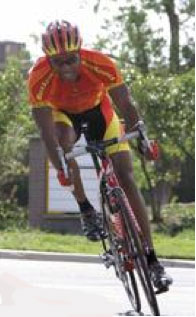 Then there’s cornering. There’s no real secret to this. But over the past year, after a few crashes, I found myself entering corners with a lot less bravura than I used to. I noticed that I was paying too much attention to the road immediately ahead of myself when coming into a turn, and that resulted in a turn at a slower speed, and maybe some issues with holding my line.

But a couple of weeks ago, it occurred to me: I haven’t been using the proper technique to corner my bike. Remember, the bike will go where you look, so it’s always a good idea to look well ahead, and even around the corner. Taking my eyes off the road right in front of my front wheel makes a marked difference in how well I get through the turn. Remembering to jam my outside foot down on its pedal, and point the inside knee into the turn, adds more stability to the bike. I’m liking my rediscovered confidence in corners.

These are fundamental skills for me. But how much time do gifted athletes spend on the fundamentals of their sport? Yeah. By concentrating on these three things once a week, I find that they’ll be there when I need them on my other rides.