I’m 40 miles into one of my usual rides and there’s a battle raging in my pants. 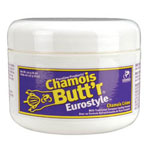 The combatants? Two chamois creams, each holding onto their own piece of territory. In this corner, weighing in at $19.99 for an 8 oz. jar is Paceline’s Chamois Butt’r, a pretty common cream found in many bike shops. In the opposite corner, weighing in at a daunting $24 for a 4 oz. tube, is dznuts (pronounced DEEZ-nuts), a premier high-end brand.

Which will take the title in the, uh, end? I’ll let you know as soon as my nether regions finish sorting it out.

Go ahead and laugh, but this is serious testing, from a bona fide professional journalist. Before my ride I had carefully measured out equal amounts of both creams (or just grabbed a two-fingered scoop), applied the creams to specific boundaries of my anatomy (or as specific as you can get when you’re messing with an area you can’t really see), and then got on the bike and rode a precisely measured course (I just go up to this sign, which is about 22.5 miles from home…and turn around).

Why? To find out once and for all if one glob of goo can actually be worth more than twice the price of the other. And yes, let’s face it, just to have the opportunity to say something about Dave Zabriskie’s nuts in print.

One difference between the two products is immediately obvious. Dznuts is a thicker viscosity cream with an almost whipped appearance, where Chamois Butt’r is somewhat lighter, with a shiny, almost watery look to the surface. Apply them and both provide a cooling sensation. On the road they maintained that feeling of coolness, but with subtle differences. Chamois Butter’s sensation was slightly more pronounced, dznuts a little less in your face. (No jokes about the butt-face jump in logic here.) Other than that, however, both seemed to do the job. Late in the ride I did feel like dznuts thickness helped it to stay on slightly better, where the less-thick Chamois Butt’r may have been losing a little of the battle to sweat. The cool sensation of the Chamois Butt’r, however, seemed to last slightly longer than the dznuts, perhaps distracting me a little more from how long I had spent in the saddle. At the end of the day both washed away, from me and my chamois, with soap and water.

The Euro Version of Chamois Butt’r contains menthol, witch hazel, and Brazilian peppertree, but contains mineral oil and a few other ingredients that give a natural ingredients proponent pause. Dznuts relies on tea-tree oil as an anti-bacterial and anti-fungal, Evodia, a Chinese herb, for wound-healing and anti-inflammatory purposes, and Masterwort for its wound-healing and calming properties. It claims a more organic approach, trying to stay as natural as possible.

Why avoid certain products? It’s up for debate. Mineral oil is petroleum-based, however, and has been blamed for doing everything from promoting acne to messing with cell development. It’s also, however, the basis of many baby oils. You’ll just have to make your own call on this issue.

So back to the original question — is one worth twice the price? Probably not. Both get the job done. A lot of dznuts premium probably goes into its fancier, high-end packaging. I do like that it’s a more natural product, however, and I prefer its texture and consistency.

I said I’d let my nether regions sort things out, and truth be told, my butt has apparently been telling my brain to go for the dznuts, as it’s the cream that’s been seeing the most use since the initial showdown. Once it runs out, however, the butt and the brain will likely have to factor something else into the equation — the wallet — before the next purchase.