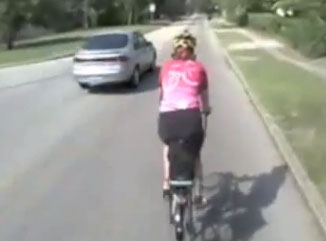 One of the first things I learned on my first group ride was to call “Car back!” if a car approached the group from behind.

The warning served two purposes: to let everybody know a car was around, and to tell everybody to get into single file to let the car pass.

So why is it that more and more, I hear “Car back!” or call it myself, and the group blithely continues along, blocking the car from passing?

Make way for the car. It’s bigger than you. In a tangle, it will always win.

And I can think of no quicker way to antagonize drivers than not moving out of the way.

One of the more amusing cases I witnessed was on a club ride, when a big pickup was held up by our group — a couple of riders were riding side-by-side, chatting. The pickup pulled into the oncoming lane to roar past, but the passenger rolled down her window and started shouting the Bicycle section of the Texas Transportation code – the part about riding single file.

Problem was, another big SUV was coming at the pickup, and had to dive for the soft shoulder of the road when the pickup couldn’t get back into its own lane fast enough. Amusing, but dangerous. And even though the pickup was too impatient in that incident, you know those folks are not going to be kind to cyclists when they come across them in the future — even if in single file.

What I’ve noticed is that most of the time, bikers are engaged in a conversation when the “car back” warning comes. It must be a really important conversation to not break it off, get into line, and then resume it when the car passes.

Lots of bikers seem to have an “us versus them” mentality when it comes to cars. Bikes are greener than cars. They take up less space on the road. To heck with them.

Under state laws, bikes are vehicles. We have certain rights when it comes to using the road. We also have certain responsibilities.

The next time you’re with a group and someone calls, “Car back!” do what you’re supposed to do. Cut off the chatter and get into a single line. It won’t hold you up at all, and it will do its small part to ease relations between us and motorists.

Picture from the fine Commute Orlando blog. Lots of good safety information there, although set in a more urban environment than I talk about here.