Last year, fed up after what seemed like an endless number of flat tires, I decided to pay real money and get some durable tires.

I paid a ridiculous retail price at a local bike shop for a Continental Gatorskin, because I had heard so many good things about them — mainly, that they resisted flats.

I liked the Gatorskin so much, that I bought a second one for the front — ordering online at a much lower price this time. As a full Gatorskin bike owner, I was now set.

I gotta say, they’ve been great. A big difference between the Gatorskins and previous brands I’ve owned — Specialized, Vittoria, Hutchinson — is that they seemed to resist the normal cuts and gashes tires get in normal everyday riding conditions. Let’s face it — it’s a jungle out there, with broken glass, radial tire wire, and microscopic metal shavings all waiting to take your tire down.

The knock against these tires is that they’re heavy, and slower than comparable tires. But if you’ve been reading this blog for awhile, you know I’m no speed demon, so that doesn’t matter to me.

Just the other day, I was inspecting the tires for cuts, and there just weren’t any to speak of. Oh, a couple of really tiny ones — but you’d expect more than that after 1200 miles.

Today, my luck ran out. I was on one of our most popular local routes — the Mopac Expressway — when I heard a “pop — whissssh.” The best tire I’d ever owned fell in combat against a glass-littered shoulder.

I felt around the inside of the tire, but couldn’t locate the cause of the flat. The new tube went in easily, and I used my trusty Topeak Road Morph pump to inflate it to 105 pounds. Then I saw it. 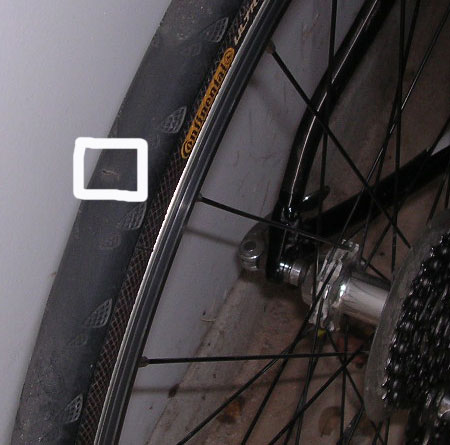 The first big gash I’ve ever seen on my Gatorskin.

I must have hit a dandy shard of glass, because the gash across the tire stood out like a boil on a baby’s butt. When I ran my finger over it, I could feel it protrude up from the surface of the tire. There was a space between the cut tire edges. If I’d noticed it before I did the repair, I could have added a boot to the tire — I keep strips cut from ride numbers in my seat bag just for that purpose — but the last thing I wanted to do was pull the tire off and put it back on all over again. I got on the bike and pedaled gingerly for the remaining four miles home.

Later tonight — or maybe tomorrow morning, depending on my mood — I’ll take off the cut tire, boot it, and put it on the front. I’ll rotate the front tire to the rear.

Then, just to be on the safe side, I’ll go online and order another tire. It’ll be a Gatorskin.