It’s fascinating what you can learn from the cycling community.

Last week, I was battling a painful bout of gout in my left knee. I couldn’t bend the knee without it hurting, and I walked with a pronounced limp.

That’s all in the past now. A steroid injection into the knee and some time on the bike has done wonders. I’m walking normally again. The more time I ride, the better the knee feels.

But while I was laid up, I got lots of interesting advice. One item didn’t apply to my gout, but it’s interesting enough that I’m going to look into it anyway. It’s called the Kneesaver. 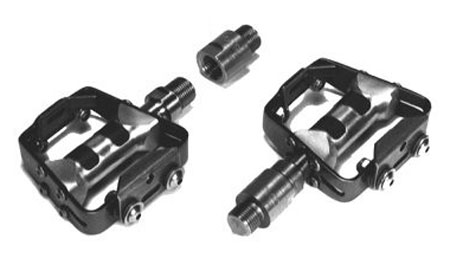 The idea behind the Kneesaver is simple. It’s an extension to the pedal axle, just 20, 25 or 30 mm long. The company says that added width to the pedal (what it calls the “Q factor”) can reduce or eliminate pain in the hip, knee, ankle or foot.

One said he bought them to help alleviate pain in his hip that came on after a crash.  Not only did the pain go away, he said, but his knees felt younger, too (he’s in his upper 50s). When he started riding his “rain bike” during colder winter weather, the hip pain came back. He moved the Kneesavers over to his rain bike, and the pain went away. “A wider stance on the pedals will more closely approximate your ‘at rest’ standing position and that’s where you will have the most comfortable knee rotation,” he said.  “It’s an old guy thing.” He was so happy with his experience that he’s buying another set for his wife.

Lending even more credibility to the worth of Kneesavers is a comment from another club member, who happens to be a physician. He also complained of hip pain after long bike rides. “What put me onto it was I noticed that long rides on our tandem didn’t give me this problem,” he said, “so when I checked I discovered that the Q on the tandem was an estimated 30% wider–because they use a MTB crankset (MTB cranksets have a significantly wider Q). When I measured my ‘standing Q’ it was 10cm wider than my road bike, so I increased it the minimum.”

One thing to watch for if using pedal extenders is the increased possibility of “pedal strike” in corners. You can’t lean the bike as far without the pedal hitting the ground. But since we’re supposed to corner with the inside pedal up, that shouldn’t be a problem.

This post is not to be considered an endorsement for Kneesavers. I haven’t tried them yet.  But I’m not getting any younger, and anything that keeps me going in comfort is worth a look.