Things can turn around markedly in just a week’s time. Last week, I was concerned that I didn’t finish 65 miles, bailing from the ride at about 56. I was sore, tired, out of water, and moving slowly against an unrelenting headwind. 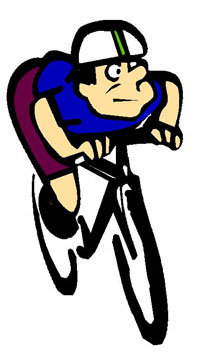 The DNF made me feel bad though, and over this past week, I’ve redoubled my efforts to get into decent biking shape. The day after the DNF, I did a spirited 25 miles with just as strong a headwind as the day before. On Tuesday, I met one of the club members at the Veloway, and he paced me for a couple laps at an intensity I usually don’t ride. Friday, 20 miles of hard work, including three hill loops of a decent suburban residential street with a grade that used to wipe me out after one climb.

Saturday, Pat and I decided to join the Hill Country Ride for AIDS group on one of their training rides. The route was interesting. One circuit covered 23 miles, a good ride for Pat. However, riders had the option of going around on a second loop, for a 40-mile total. I took that option, and even though the loop had a few longish challenging hills, I felt fresh at the end of the ride. My average speed was 15.9 mph, at the high end of my usual averages.

Sunday, I skipped the club ride because of a light rain. I figured I’d wait until the wetness cleared out in the afternoon. Sure enough, everything was dry by 2 p.m. and the temp had climbed to 82°F (27°C). The brisk wind from the southeast didn’t bother me as it did just a few weeks ago.

Clearly, things are shaping up for me. And it’s happened in the course of only one week. What caused the improvement?

I pushed myself. Instead of allowing myself to ride at my usual pace, I made it a point to shift up one gear higher than normal and pedal harder. The hill repeats were never a regular part of my riding. I’ve made it a point to get more saddle time (sometimes to the chagrin of my derriere).

Just riding the way you always ride won’t bring improvement. You have to ramp up the effort. I’ve put in more miles and greater intensity this week, and it’s paying off.