The weather gods must have been smiling. Despite ominous forecasts for heavy rain, the wetness was only temporary, and I now have a full two-day BP MS 150 under my belt.

I woke up in Houston early Saturday morning, feeling the effects of too little sleep. I always get wound up in anticipation of a big event, and this was no exception. But my riding partner Bob joined me for breakfast, then in organizing our gear, getting our luggage dropped off at the luggage truck, and collecting our bikes.

The morning dawned overcast and gloomy, but about 13,000 riders were on hand for the largest fundraising event in the United States. Teams started according to the amount of money their members raised. My team, Team St. David’s (a large health care concern in  Austin), started fourth.

About a mile into the ride, the skies opened up and it started raining. But the rain wasn’t hard, and there was no wind to speak of to make it difficult to contend with. Within a half hour, the rain stopped. The skies stayed overcast, but it looked like we would stay dry.

The first day of the ride goes from Houston to La Grange, Texas, and covers 100 miles. Considering how far they had to travel, the bikers moved along at a good clip, with the occasional paceline speeding things up, provided you could hang on if you jumped on the back. With so many in the event, the roads are never clear of cyclists. 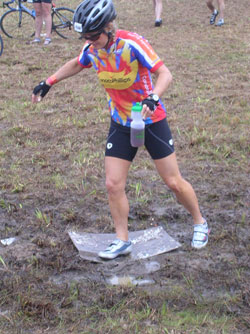 The morning’s rain did make things challenging at the rest stops. Porta potties were lined up in a grassy area away from the food and drink tents. But the rain turned the fields to mud, making it challenging for cyclists to keep their shoes in semi-usable shape. This one was particularly bad right after the morning rain, but throughout the weekend, rest stop crowds had to contend with mud that clogged cleats and made it difficult to get clipped back into the pedals.

With so many riders, rest stops are always crowded on the MS 150. The Saturday lunch stop in Bellville was especially so. Cyclists surrounded an old octagonal school building on the county fairgrounds, as well as the fairgrounds themselves, to take a break and eat sandwiches, fruit cups and other food.

As the day wore on, there seemed to be more and more crashes along the way. Some were serious. In two cases, we saw ambulance crews place injured cyclists on back boards. Mostly, they were riders who suffered road rash after hitting the asphalt. And within one mile of the finish line in La Grange, two crashes injured cyclists — including one of the back board cases.

It was good to finally reach La Grange. We covered 101.5 miles at an average speed of 16 mph. I felt good, but the picture Bob took soon after we crossed the finish line shows that the day took its toll.

When 13,000 people converge on one spot, problems can arise. After a long, warm, sweaty day, riders wanted to get clean. Shower trucks were a popular spot. So popular that the lines were unbearably long. I waited almost an hour and a half to finally get under the spray.

Most teams and their riders stay in large tents at the county fairgrounds. This is one of the reasons for joining a team. They provide the tent, the evening meal (barbecue), cots, and massages.

But there were concerns at our tent. The forecast called for heavy rain overnight, which could easily result in flooding. We nixed a proposal to move to another tent in a less flood-prone area, and bet that we wouldn’t face any real problems. Instead, we put all the cots together at the center of the tent — got really cozy with our teammates — and at 10 p.m., lights went out.

It wasn’t quiet, though. Not only did several of the guys snore loudly and continuously, but whenever you changed position on the tightly-stretched cots, they emitted a sound like the popping of bubble wrap. Pop-pop-pop-pop-pop vied with the snoring to make the night a restless one for me.

The rain came, but fell far short of the deluge that had been predicted. Of greater concern was a cloudburst that hit around 6 a.m., while we were in the breakfast pavillion. However, by the time the ride was to start at 7 a.m., that rain had stopped too.

Bob and I were in line at 6:45. We finally got out on the road at 8:15. Another long wait at the MS 150. But except for some dangerously rough chip seal on the Highway 71 shoulder for the first several miles, the Sunday ride went off without a hitch. We rolled across the finish line in downtown Austin at about 3 p.m. Our Day 2 stats: 66 miles at 14.7 mph.

It’ll take a couple of days for my butt to get back to normal, but other wise, it was a great ride for a great cause. I recommend you try an MS 150 ride sometime.