Or my helmet, actually. I took an after work ride this afternoon, and while I was on the road, something hit the big vent in the middle of my helmet. I could feel it jiggling around inside.

I put up with it a little while, but it drove me nuts. I felt around inside the vents with my fingers, but couldn’t find anything. Since I am allergic to bee stings, I decided to pull over and get the critter. 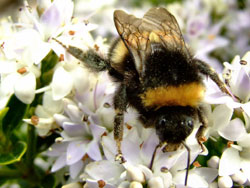 The incident reminded me of a ride with my friend David.  He was a few bike lengths behind me, when he called out that a bee had flown into his helmet. He kept feeling around in the vents, but couldn’t find anything. In a little bit, though, he had some discomfort, and asked me to stop. He pulled off his helmet and a bee flew out. He had been stung. Luckily, he didn’t swell up badly.

I know this has happened to others, as well.  Have you ever had a bee fly into your helmet?

In my case, it turned out not to be a bee at all. Instead, it was a small round black bug of some kind. No stinger, no venom. When I took off my helmet, it was crawling around along the inside styrofoam surface. I shooed him away and continued the ride, but now that the warmer weather is here, I think I can expect I’ll be tussling with bees and other bugs in the helmet more often. And I won’t be taking any chances. If one gets into my helmet again, I’ll stop immediately and get it out.