Don Blount gave us a rundown of his upgrades in the last post. Now, he reviews one of his recent equipment upgrades: his saddle.

If you want to get a conversation about biking equipment going, just bring up saddles. When Bikenoob tweeted recently that he had gotten a new one, I quickly asked: which one? I saw that @mainevelophile also asked that question. I would guess that we were not the only ones.

Well, I got a new saddle too just a few months ago. I retired the Forte Pro SLX saddle that came with my bike and went with a Selle Italia Gel Flow SLR saddle. The new saddle works for me and I love it. But it may not work for you as saddles are such an individual piece of equipment. A clerk at my LBS said he used the saddle I bought and it hated him. He switched to something else.

The SLR is a leather grain-covered racing-style saddle, weighing in at about 215 grams. The saddle has a slight curve at the rear (no pun intended) that is supposed to help relieve back pain. It also has “strategic gel inserts” that, at least for me, provide plenty of padding in the right places.

The saddle comes in black, blue, red, white and yellow. I bought mine, in black, on eBay for $98 – I’ve seen it for as much as $179 at other retailers. Mine cost less because it has a slight barely noticeable cosmetic imperfection that, fortunately, does not affect performance.

Still, a saddle is such an individual choice. Keep in mind that your seat, hands and feet are the three places where you as a rider come in contact with your bike. If you are not comfortable in one of those areas, it can make for a miserable ride.

When selecting a saddle you have to consider your riding style. Do you settle in one spot on the saddle and stay there? Do you move around? Do you ride on the front or back of the saddle? 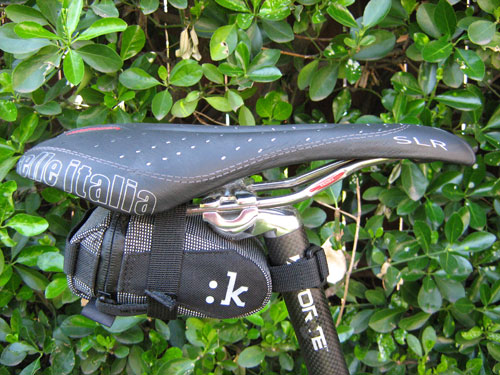 I move around on the saddle, that’s just how I am. The SLR allows me to sit in a number of spots comfortably.

I also prefer a cutout in the middle, so as to physically, and psychologically, have nothing pressing on that tender area down there.

A few days ago while stopped at a traffic light a pedestrian gave my saddle a funny look and asked if it was comfortable. I said, “Yes it is…”

I have plenty of hours and hundreds of miles on this, including a metric century and I plan on getting in many more.

I recommend the SLR but with the caveat that what is right for me, may not be right for you.

The Bike Noob reviews his new saddle in the next post.