As you probably know if you’ve read this blog for a bit, I’m not one for really intense workouts. But I did one the other day.

Not far from my house is Convict Hill. (Convict labor quarried limestone on the hillside that was used to build the Texas State capitol in the 19th century.) Convict Hill Road runs up the hill, and it’s an okay climb, but most anyone can handle it. However, if you take the back way up, via Kenosha Pass, there’s a good climb followed by a tougher climb. Neither is very long, but I’m usually gasping for breath when I get to the top. 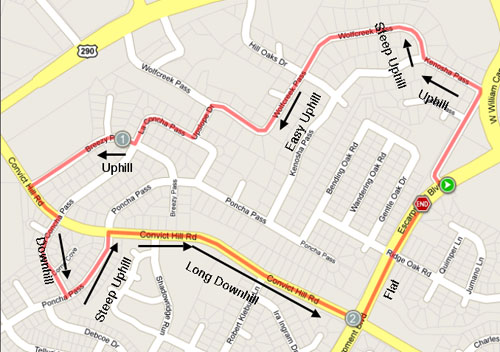 From there, you can recover for a few blocks, but Breezy Pass features another intermediate climb up to Convict Hill Road.

In another block, I turn right down La Concha for a fast downhill. But right away I have to climb up Poncha Pass back to Convict Hill — and that’s a steep one. In fact, some guys I know just do repeats of Poncha — each time shifting up one cog until they’ve gone through the whole cassette.

My favorite part of the route is a long sweeping downhill on Convict Hill Road. But at the bottom, I turn left, and do it again.

I did this little exercise three times, then headed for some flat streets, which I ran at time trial pace. It made for an intense 18 miles — until I got a flat. But that’s another story.

Two days later, I still feel soreness in my calves. They’ll just have to get used to it. I’ll be back to do this one again.

Now, I know Austin is loaded with REAL hills.  I’ve been on a number of them. But it gets boring to have to get off the bike and walk halfway up, and it really takes a toll on your cleats. I’ll go back and try some of those hills again — after I get the hang of doing this little diversion.