From time to time, we’ve talked about comfort on bikes. What kind of saddle to get, how important a pro fitting is, switching to wider tires. But some cyclists take an entirely different path to comfort. They modify their bikes to suit their purpose.

B.J. Ondo of Colorado Springs, Colorado, is one such rider. He and his wife, Jo, plan to do some bicycle touring. B.J. had a mountain bike, and instead of buying a road bike to go with it, he decided to modify it instead. This is what he came up with. 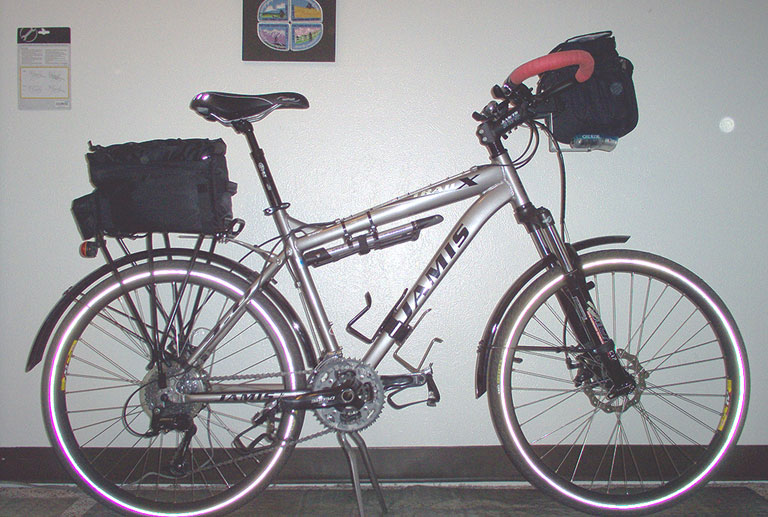 It started life as a 2009 Jamis Trail-X 3.0 hardtail mountain bike, at a cost of $500.00. But B.J. has modified it enough that he now calls it his “Frankenbrid.”  He says it gets odd looks from other cyclists, but he’s happy with it, because his riding interests are different than a lot of people’s.

“I wanted a ‘tough’ bicycle, since speed is my bottom priority,” B.J. told me. “I didn’t want a lightweight, the bike needed to be able to handle a dirt or fire road. We’re not hardcore singletrack riders, mind you, but we didn’t want to ‘fear’ the dirt.”

B.J. ticked off a list of modifications he made to the bike to get what he was after.

“I changed out the handlebars to the ‘butterfly’ or ‘trekking’ bars, added full fenders and the more upright 120mm/40 degree stem, racks etc. I had the more agressive Deore MTB cranks installed by the shop. I liked the larger big ring (44 teeth instead of 42 on the OEM crank) and the longer arms (175 mm instead of 170) and the overall level of stiffness. I worked an adaptor to make two waterbottle cages fit (the old photo shows the velcro bottle holder). I did a lot of searching on the net for examples of what I like to call ‘Adventure Tourers’ and asked a few questions on sites like Bike Forums too, to get ideas.” 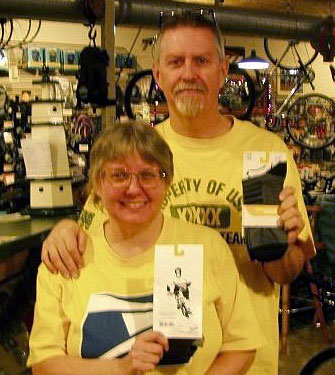 B.J. and Jo are members of a local bike club, and they take part in the occasional group ride, but he’s not out to hammer with the peloton.

“I’m a pure ‘Smell The Roses’ type of rider,” B.J. said.  “Mellow group or social rides are my cup of tea. Fitness is something I don’t actually strive for as I ride as much or more for ‘mental’ fitness and happily accept that the riding helps the physical side too. I like all surfaces — paved trails, bike lanes, hardpack dirt trails and just standard paved roads too. I’m working on miles as I work my way to becoming a touring rider, instead of just a recreational road rider.”

So, after a modification like this, what’s the best thing about the bike?

“I like the feeling that, if I had the money, I could tour to the ends of the earth on this bicycle, with no fear of taking it anywhere,” he said. “I can ride just about any road surface and never give it a second thought. It’s also just really FUN to ride. I like that although I’m the slowest climber, I can usually get to the top of the most ugly hills when others are pushing more expensive bikes! And this bike can really BOMB down a massive grade and take on the bumps and ruts of a semi-crummy paved road and just laugh it off!”

But you’ve got to pay a price in weight with that kind of bike.

“Yep it’s heavy, although I think the stuff I carry in my rack pack is actually heavier than the bike,” he said.

But on the plus side, he got the kind of bike he wanted, and had the satisfaction of building it up his way. He says it’s not that hard. Although he has some experience as an apprentice bike mechanic, he doesn’t consider himself a super wrench. “I’m really good at replacing or changing parts, but I suck at the fine tuning adjustments so most of the adjusting is done by my LBS,” he said.

And he encourages anyone else who wants to customize their bike to meet their own riding needs to follow his example. “Check out some examples and just figure out what you want out of your ‘Frankenbrid,'” he said. “But mainly have fun. I really enjoyed building a bike to fit my purpose instead of just pulling out the credit card and buying something.”