The other day, my wife and I took an easy ride in the neighborhood. The ride was uneventful, until we approached a stoplighted intersection for a left turn. I looked behind me, and she wasn’t there! That was odd, since the last time I saw her, she was less than 100 yards behind.

I turned around and doubled back. There she was, at the curb under a large shade tree.

I immediately broke one of my tire levers trying to pry her 28 mm tire off its rim. The tube came out easily, but when I grabbed its replacement, I saw a problem. Her tubes have Schrader valves. My pump can only do presta valves.

She rummaged around in her seat bag, and came up with four CO2 cartridges and an inflator. Two of the cartridges were used. Why they were still in there, I don’t know. One emptied from the inevitable misfire. Luckily, the final cartridge filled the tire just the way it’s supposed to.

That night, I turned the kitchen table into Bike Tire Central. I had just taken advantage of a sale at Performance, and had stocked up on tubes. I found one, and took it from its box. 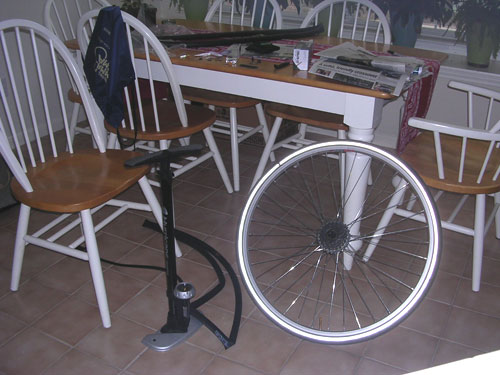 Yes, I made sure to leave it spic and span when I was done.

Oh, crap. It had a presta valve. So did the other replacement tube. But the valve holes in Pat’s wheels are large,  to accommodate Schrader valves. I put one of the presta tubes on, and found it wasn’t going to work. 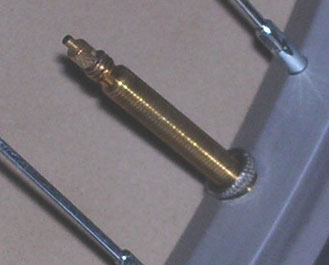 The rim hole for the Schrader valve is large enough that the presta valve lock ring sinks into it.

I must be something of a packrat, because I seldom throw out anything related to biking. Out in the garage, I found two old tubes with Schrader valves that fit her rims. Both needed patching, but I also had three patch kits lying around.

The tire is okay for the time being, and there’s a replacement tube in her seat bag with the correct valve. She rode 28 miles Sunday morning, and didn’t get a flat. But I can see that Bike Tire Central will be busy again soon, when I get new replacement tires for her and mount them — along with Schrader valve tubes — on her bike.