This post may be coming a few days late — at least in Central Texas. We’ve had nearly a week of heavy rain, courtesy Tropical Storm/Hurricane Alex. For those of us who have to get out on the bike, it means we had to ride in wet conditions. 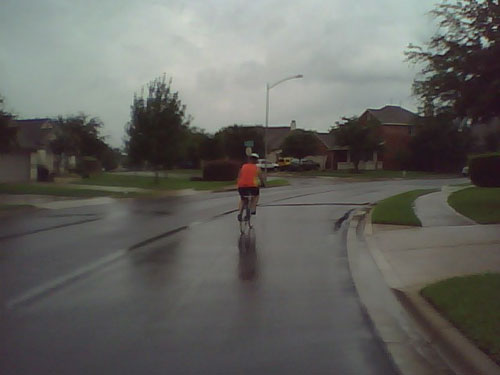 My wife approaching our neighborhood on a recent wet ride.

My last major crash came because of wet roads. Ever since, I prefer not to ride if it’s raining. But often, I get out out on the road when the rains come. So we might as well learn to deal with them.

It’s a good idea to test the road surface first. We all know (I hope) that roads are slipperiest when the rain has just started, because it brings oil to the surface. After the rain has been around awhile, it washes that oil away.

So, you might want to start your ride in the wet by standing on the pedals to accelerate quickly. If your rear wheel slips, you know the road surface offers less traction. Be careful.  Greg LeMond used to test the surface by taking one foot out of the pedal, and sliding the rear wheel out while stopping to see how much traction the roads would give.

Do your braking well before you enter a turn. Remember that it will take longer to slow down because your brake pads are skimming water from the rims. But don’t brake while turning.

If the road is clear, try to take the turn on a wide arc. That has the effect of straightening the curve. Be smooth about it.

Lots of riders (myself included) try to keep the bike upright, but lean their bodies into the turn. Pro cyclist Davis Phinney says that’s not necessary. Lean both bike and body, he says — just do it gently, and not as far as you usually would.

In fact, slick road tires probably offer more traction than knobby MTB tires, because more tire is in contact with the pavement. However, it is commonly recommended to lower the air pressure in your tires on wet days. I bring mine down about 10 pounds in each tire, and have had good results.

It’s also been my experience that I’m more likely to have punctures in wet conditions, because the road gunk you pick up tends to stick to the tire. So a piece of glass or metal that you might throw off after one revolution in dry conditions might stay on the tire for several rotations — and that increases the likelihood that they will punch through the tread.

Road surface makes a difference. Concrete is better than asphalt. Chip seal is pretty good, because the rough surface gives the tires something to grab. Old asphalt is better than new asphalt. When I crashed, I was turning from an older chip sealed road onto a recently-asphalted residential street. Water collected on the surface of the new asphalt. When my tire hit the new stuff, it slid out from under me.

Be wary of metal surfaces like manhole covers, or flat metal sheets in road repair areas. They’re as slick as ice. So too, for the raised paint that marks traffic lanes. Two riders in the Tour de France prologue were knocked out of the Tour because they hit those raised traffic lines.

Riding in the wet may not be the pleasantest way to spend time on the bike, but it doesn’t have to be a ride-stopper, either. For me, the biggest problem riding in the rain isn’t the road surface, but keeping my glasses clear. Any ideas to help with that?