Saturday morning, in what is truly a departure for me and my style of riding, I signed up for a training workshop.  It was going to take place near my house, so it was convenient, and it was going to do hills, which I need lots of help on.  So I rolled out of my driveway at 8:30 and 15 minutes later was with a group of like-minded cyclists near the Austin Veloway, waiting for the fun to begin. 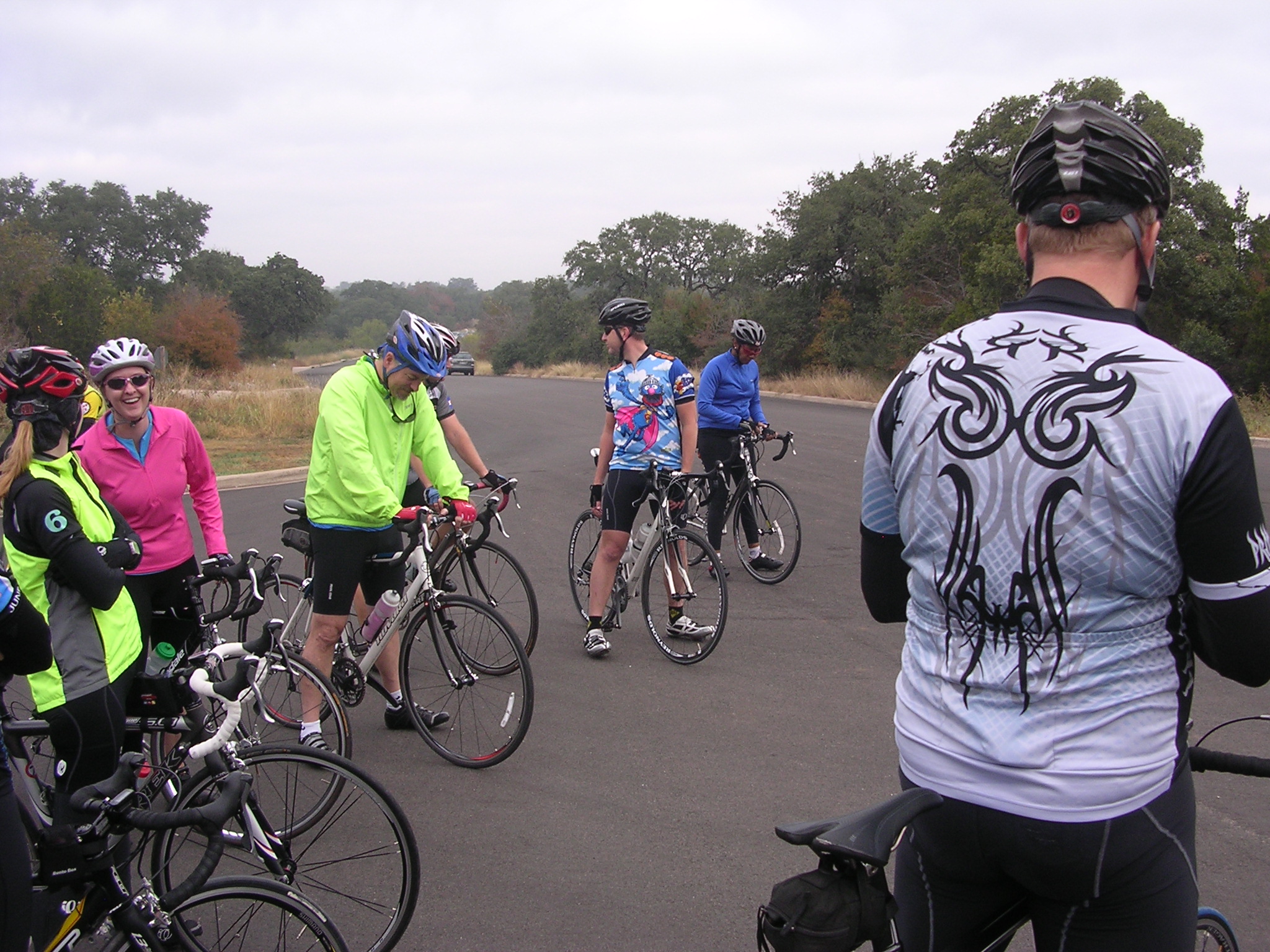 Waiting to get started.

Austin Cycle Camp is putting on free workshops every Saturday in November.  I missed the first two, because of lousy planning on my part, and was anxious to see what these 90-minute sessions involved.  In all, 26 people showed up.  The AC2 (Austin Cycle Camp) coaches divided us into two groups, and explained what was in store for us.

My group started with long hills.  Actually, just one long hill, and it just happened to be one with which I am intimately familiar, since it’s part of the Mopac route I ride all the time.  The hill is about three-tenths of a mile long, not too steep, but it can kick a cyclist’s butt.  Coach Trey told us we were to pick a base cadence and maintain it all the way to the top.  Okay, not too tough.  I figured I could hold 80 rpm easily enough.

Not so easy.  About 100 yards from the top, I fell to about 77, and just couldn’t get it any higher.  I cruised around a corner to regroup with Trey and some of the other cyclists.  He told us to do it again — three times in all — and increase our cadence each time.

When we regrouped after the third climb, everyone was glad of the chance for a breather.  The other group had been working on short, steep hills, and they joined us so we could switch places and coaches.

Now, Coach Dave took us a short distance away, down an easy hill to a turnaround, where we stopped to hear what he had planned for us. It was all about cadence again, but this time, we were to start in a low, comfortable gear and ride that same gear to the top.  Looking back at the hill we had just come down, I wasn’t impressed. It was nowhere near the really steep hills Austin is famous for.  But Dave said this exercise would be a good training session.

Okay, quick pedal to the top, turn around, come back down.  Now, he said, do the hill one gear higher.  And each time, we had to shift up one more gear.  Six times in all. Then he had us do the last climb out of the saddle.

I don’t think anyone was beaten by the drills.  As one rider noticed, “Nobody threw up.” But I found them to be very useful. These are streets right in my neighborhood, and the session gave me several ideas for making my rides around here more challenging.  I already do hill repeats just a few blocks from where our workout was — but I’ll be doing them differently from now on, shifting up each time, maintaining cadence.  It’s a more structured kind of training than I usually go in for, but I know it’ll help.  And there’s one more free clinic to go this month — I’ll be there next Saturday.