After last weekend’s hill training with Austin Cycle Camp, I was looking forward to the last of their free November sessions.  This one was scheduled to take place in Cedar Park, northwest of Austin.

Their web site didn’t indicate what kind of training would be involved, but on Friday evening, I got a confirmation email from AC2 (Austin Cycle Camp) that said we should bring heart rate monitors, because we would be doing heart rate training.  Hmm.  I’ve got one, but its strap was broken, so it wouldn’t be of any use to me.  The email indicated that there would be a limited number available, so I figured I’d get to the location early and try to get one.

The morning was chilly.  I even had thoughts of forgetting it and crawling back into a warm bed.  But a check of the online weather sites revealed that they were predicting a temperature of about 40ºF (4ºC) by the time we were to start, so I loaded up on cold weather gear and drove up there. 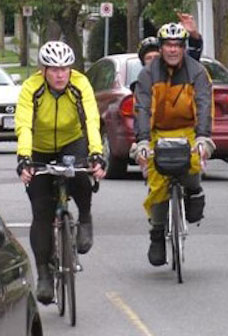 It turned out that the reason for the heart rate monitors was to make sure we stayed in Zone 2 — the easy training zone.  Coach Dave even set the HRM he lent me to indicate not heartbeats per minute, but percent of maximum heart rate.  We were to start out in Zone 1 — 55 to 70 percent of max — then after a short warmup ride, head out on the highway and maintain a Zone 2 effort — 70 to 85 percent.

As Dave predicted, the group (about 15 people turned out) spread out quickly on the highway.  Those in better condition could maintain a higher speed in Zone 2 than those who were more casual riders.  We were to go for 20 minutes, then turn back.

Gently rolling hills along the route made maintaining a Zone 2 effort difficult.  The coaches encouraged us to keep pedaling, even if on a downhill.  Going uphill, we had to shift down to very easy gears to keep from going above 85 percent.

Back at the start, after a little less than an hour in the saddle, Dave told us that the effort we had just put out was where we should be for most of our winter training.  With no major organized rides or races on the horizon, the emphasis should be on building or maintaining a base.  That will improve your aerobic capacity, and teach your body to burn fat instead of glycogen.

I had done slow training rides before, but always had trouble maintaining an easy pace for a full hour.  There’s always the temptation to attack this favorite hill, or carve that upcoming turn.  But it turned out that even at a sedate Zone 2 pace, we weren’t really lollygagging.  My average speed for the session was over 16 mph — about what it is when I’m out on my normal neighborhood rides.

So now that I know what Zone 2 feels like, I’ll be riding it more often.  I’ll reserve one ride a week to turn on the afterburners — you have to remember what it feels like to go fast — but otherwise, I’ll be the guy pedaling in a fast cadence who just glides along the street.