One of the things I had planned to do in 2010 was to learn more about bike maintenance.  Besides fixing a flat tire, I’m not good for much.  But for some reason, I never really got around to it.

Yesterday though, I threw an old junk bike into the back of my vehicle and drove over to Austin’s Yellow Bike Project.  The Yellow Bike Project is a community-supported non-profit that relies on volunteers to fix up old bikes.  These bikes are made available to people without the means to get their own bikes.  In addition, it provides space for anyone to work on their own bike for free, as long as you also donate an hour of your time for each hour you work on your own to fix up other bikes.

Once in the shop, a coordinator got me entered into their computer system, and had me take my junk bike over to a stand and work table.  One of my biking friends, Tim, was working at the stand opposite.  He looked over my bike and suggested I start by repacking the hubs.

It probably took me three times longer than it should have – anything involving tools usually does – but Tim was always there to answer my questions and guide me through the process, even though he was working on a bike at his own work station. I got the front hub done just a few minutes before the day’s shop hours ended.  Tim put the wheel on a truing stand, explained how that worked, and decided that the wheel didn’t need any truing – it was good enough.

I’ll be back to Yellow Bike.  Yes, I’m a volunteer, but I’ll probably get more out of my participation than they will by having me around.  At least I’ll  be better versed on different techniques for handling my own bike repairs, which is what my goal is.

Organizations similar to Yellow Bike can be found all over.  You might have one near your home, and don’t even know it.  Check the links at the bottom of this page – they’re for other bike repair co-ops.

That same evening, I had signed up for a bike maintenance class at Mellow Johnny’s bike shop in downtown Austin.  The topic was the drivetrain, and I was looking forward to it, even though the shop’s email said it would be a pretty basic class.

Four of us showed up, and one of Mellow Johnny’s mechanics took us through the basics of the drivetrain.  The main part of the class was on chain cleaning and lubrication.  Okay, I clean and lube my chain pretty regularly (although not as regularly as I should, it turns out), but I still got some interesting tidbits out of it.  Because the main part of his presentation ended early, the mechanic entertained questions on any aspect of bike maintenance, and the answers were helpful.

My wife had been complaining on recent rides that her bike didn’t seem as smooth as it had in the past, and asked me to bring it over to our club’s mechanic.  But I figured that, based on what I’d learned at Mellow Johnny’s, her drivetrain just needed cleaning.  One look at the cassette told me I was right. I gave it a thorough going-over this afternoon, and took the bike on a test ride afterward.  Smoothness.

My own bike could use some work too, so I cleaned and lubed its chain and cleaned off the cassette, which was way overdue for some attention.  I’ve always thought that I lubed it at reasonable intervals, but it turns out that I’ve been letting it go too long between jobs.  After today, it’ll enjoy my ministrations much more frequently. 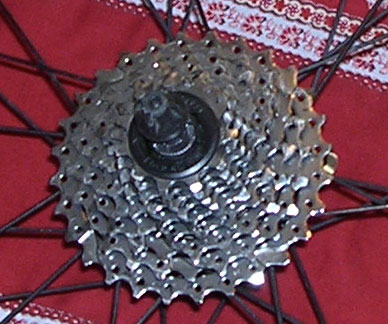 And of all things, I needed to replace some zip ties that secure my speed sensors for my bike computer.  One actually broke during my afternoon ride, and I wasn’t getting any speed or cadence readings.

I’ve always thought cyclists should have some basic knowledge about bike maintenance.  If you need some work in that area, check with your local bike shop to see if they offer any classes like the one at Mellow Johnny’s.  But hands-on is always better, so be on the lookout for ways to do your own wrenching.  Now that I’ve had a taste of Yellow Bike, I hope I’ll be able to move beyond the basics.