I used to smoke.  Cycling had nothing to do with me stopping – I quit cold turkey years ago.  One of the nice things about cycling is that the people you ride with don’t smoke, either.  At a post-ride gabfest at the coffee shop, no one lights up.

Which makes it something of a shock to see a cyclist with a cigarette.  Back at the MS150 last year, I was taking it easy in the team tent at the finish, when one of the members of my team produced a cigarette and started to smoke.  A woman, also on the team, bummed one from him.  So now we had two cyclists dragging away – in team kit.  And our team was sponsored by a hospital(!).

Of course, smoking and cycling used to be common, back before the health link was proven.  I’ve used this old pic from the Tour de France before, with some of the leaders puffing away while riding through the countryside.  The French seem to be inseparable from their cigarettes, anyway.  Way back when, it was perfectly normal for the Michelin Man to smoke while riding. 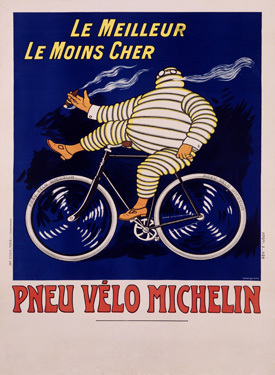 A guy I occasionally ride with always grabs a quick drag when he’s packing up his gear at the finish.  His Facebook picture pokes fun at his inability to completely kick the habit.

So how about you?  Are you a reformed smoker?  Or do you still indulge?  Do you avoid cyclists who smoke, and separate yourself from smoking riders?