I met up with my biking friend John T after work today. He was excited because he made a major change on his bike: he got a new cassette. 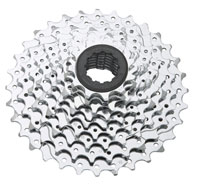 He’s excited about it because the largest cog on the cassette has 27 teeth. It replaces the original cassette that came with the bike, that had a 23t large cog. Last summer, he managed to climb “Heart Attack Hill” west of Austin with the 23, but he’s sure he couldn’t do it now, after several months of low-mile riding. He thinks the 27 will make it easier for him to climb.

I’m sure it will. When I got a new cassette more than a year ago, the bike shop found one with a 28t cog. A 26 was the largest that came with my bike. I couldn’t climb Heart Attack Hill with the 26, but I can with the 28 (and better conditioning).

Their concern is with the gaps between some shifts. I have two-tooth jumps in most gears. A lot of cyclists will tell you they prefer one-tooth jumps — that wider gaps like I have make it hard to figure out just what gear you should be in, and that means more shifting between the big ring and small ring up front.

So, the more gears you’re running in back, the tighter your cassette will be. Another option would be a triple up front with a tight range in back. The small front ring will get you the granny combination you’ll need for climbing.

Both John T and I run 50/34 compact cranksets up front. We’re not racers. We’re not climbers. We both need help on the hills. For us, a wide range cassette works.

What do you run on your bike? What do you see as the pros and cons of wide range versus tight range cassettes?