I had just begun my Tuesday evening ride, one I hope will now become a regular occurrence, now that daylight lasts longer (Hey, DST begins this weekend, doesn’t it?).

I was on a gentle downhill leading past a strip mall to a stoplighted intersection. I was in the bike lane here. Just before the intersection, a right turn lane allows drivers to bypass the light. The light was red, and about a dozen vehicles were stopped for it. But one guy, anticipating that he would take the right turn lane at the corner, was as far to the right as he could go. So far right, in fact, that he blocked my bike lane.

I had no bailout. Both traffic lanes were blocked by stopped vehicles. There was no choice but to stop behind the big Chevy Tahoe (It’s always one of them, right?) and wait for the light to change.

Okay, it was just another routine car vs. bike incident in suburban America. I was headed to a more bike-friendly place: the Austin Veloway.

Now, to get onto the Veloway track, you have to cross a gravel parking lot. it’s the only tricky part of the ride. Bike tires carve small ruts in the soft gravel and dirt surface, and a gate blocks the entrance to the track, so riders have to negotiate an opening between the gate and a berm, marked by a post and a large rock. My wife hates it. She considers it to be dangerous. 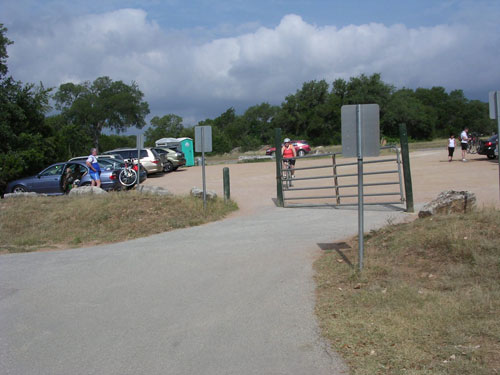 In this shot from two summers ago, my wife (in orange top) crosses the parking lot toward the Veloway gate. The surface at the opening is quite rutted.

My tires are skinnier than hers, and I’m always careful crossing the lot. Usually, other bikers are leaving parked cars to start their rides, or are coming off the track into the lot. There’s always a chance the dirt will grab your slow-rolling wheels and cause a fall.

Sure enough, this evening that very situation happened — a biker was coming from the left after pulling his bike off his car rack, and a lady was coming through the opening into the lot. I slowed as much as I dared. And then, a car that had been parked on the right side started backing up.

Now surely, the driver could see that there was bike traffic in the lot — even looking through the bike on his rear bike rack. But he didn’t stop to let me and the other bikes pass. He kept backing. The biker on the left sped up quickly, and shot through the opening. The woman who had just come through the opening stopped. I swerved left, to give the backing car a wide berth.

When he’d backed up as far as he needed to be able to turn his wheels and pull out toward the lot entrance, he stopped and made his turn.

Unbelievable. Just minutes ago, this guy had been on his bike riding the Veloway — presumably one of we band of brothers on two wheels. But now that he was driving a car, he was more of a mind with the Tahoe driver I had encountered earlier.

What is it about getting behind the wheel that causes some people to leave their cyclist selves behind?

Is it just me — or have you run into similar situations? Vent in comments.