The wind has been relentless this spring, mostly blowing from the south. I’ve been trying to plan my routes so that I’m heading more or less into it on the way out, and with it on the way back, to get a little relief.

But Saturday, I joined a small group ride in a different part of town from my usual haunts. The road we would mainly ride was Bee Caves Road — which goes roughly east-west, and features lots of long hills.

It’s a lot of fun to ride in decent weather. But I hadn’t thought about the key feature that would affect us this time — the wind was going to be hitting us crosswise, not head on.

Just a few minutes into the ride, we were heading east on a nice downhill, when pow! the wind smacked me and moved the bike toward the traffic lane. It was unsettling. Bee Caves Road is four lanes wide, with an added center lane. The speed limit is 65. Traffic is usually steady. Yipes! If that wind was going to have the potential to knock me into traffic, it could be a ride with an unhappy outcome. 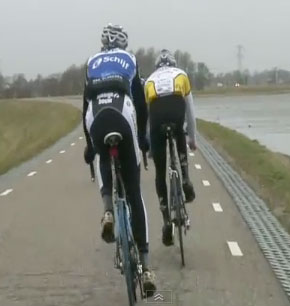 Cross winds are funny (not funny ha-ha, but funny hmm). If the wind was steady, it wouldn’t be a problem. Leaning a bit to the side toward the wind — like the riders in the picture — seems to help.

It’s the gusts that get you. How do you maintain control of your bike when it’s being buffeted from the side?

A quick check of the interwebs doesn’t turn up much help. Most of the advice about riding in cross winds applies to racers, and tells them to form an echelon. Although I was in a small group — maybe eight people — there was no way we would be able to stay packed tightly enough to form an echelon. I doubt any of us would know how to. I spent most of the ride on my own anyway, with a few riders well ahead of me, and the rest trailing by a large distance.

My reaction was to slow down. I was not comfortable riding on a shoulder — even a generous one like  the ones on this road — if I was going to get pushed one way or the other. But some advice I’ve seen says your stability will improve as you pick up your speed. For example, instead of coasting those downhills as I was doing, the advice is to pedal. By applying some power to the rear wheel, you’ll become more stable.

Gack. I was hitting speeds above 30 mph on the downhill stretches, and getting smacked by a gust at that speed can be pretty unnerving. That’s why I slowed down.

A commenter on one of the biking forums I visit said, “It takes a while to get used to the idea that getting blown around some is OK.” Yeah, I’m not there yet. But I’m sure I’ll have lots more times to try, the way the weather is going lately.

Others say to relax, especially in the elbows and upper body. One commenter suggested that unlike headwinds, when you want to minimize drag by keeping your body in an aero position, a better strategy in a cross wind would be to sit upright. That makes “holes” in your profile to allow wind to pass through.

I won’t be seeking opportunities to ride in cross winds, but I’m sure they’ll come. I’ll remember to relax, enjoy getting buffeted, and stay close to the right side of the shoulder. In the meantime, I’ll be glad I don’t regularly ride in the conditions this Dutch cycling team had to contend with earlier this year. The travails of the guy 48 seconds into the video are a hoot. Click the YouTube button to watch it in a larger size – and perhaps a smoother speed.

“Ja, Michael, you have the lightest bike!”