Note: The series of guest posts on The Most Important Thing I’ve Learned About Cycling will reappear later this week. I must resume contributing to my own blog!

You might have noticed in the Twitter box on the right of this blog last week that I had a minor crash on my bike. I missed a shift on a hill, dropped my chain, was unable to clip out, and I went over.

Just a bruise on my hip and a sore hand, but that was enough to trigger this reprimand:

“Hands on the bars at all times,” commented Mike Weiland, who should know, because he’s had his share of hard falls.

But that’s the problem. When you find yourself going down, what’s the most natural reaction? To put out a hand to brace yourself when you hit the ground.

“You brace, you break a hand or a collarbone,” said Mike. Or an arm, or dislocate your shoulder…

Even experienced riders brace for falls. It’s a natural reaction.

Okay, so I’m going to resist the temptation to brace next time (yeah, right). What can I do instead?

It depends on the type of fall. If you find yourself going over the handlebars, you can plan to roll on your shoulder. I did this in the first bad fall I had on my road bike, and although I was sore, I wasn’t hurt badly. 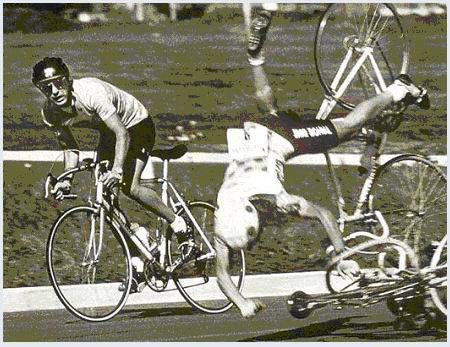 The guy in this crash looks like he might be able to drop his right shoulder, and roll on it.

Ted Rogers, who runs the blog, Biking in L.A., urges cyclists to do two things: stay clipped in, and hold the handlebars tightly. He tucks his elbows into his body. “At the same time,” he says, “I tuck my head down between my shoulders, and round my shoulders to shape my upper body into a ball. My momentum will continue to move my body forward, rolling me over the handlebars, still attached to my bike, which helps me maintain my curved position.” With luck, you’ll be able to roll on your shoulder rather than fall on your face. If he finds himself going down sideways, instead of over the bars, he does pretty much the same thing. When I went down last week, I stayed clipped in (not intentionally). That may have prevented me from being hurt worse than I was.

The roll might work for low-speed crashes, says Mike Weiland, but at higher speeds, all you can do is just skid. “Of course the one a few months ago at 24 mph I ended up hurting my hand/wrist not from bracing, but more or less punching the ground as my hand was still in the drops when the bars made contact with the pavement,” he told me.

It appears the best place to land in a crash is on your side. Hitting your chest or back on the ground could mean worse injuries. “As you hit the ground,” said one commenter on a biking forum, “try to stay as loose as possible. If you’re tense or stiff, it’s easier to get hurt.”

In practice, none of this might be possible. One cyclist posted to a forum that he’d been in two bad road crashes. “In neither case, do I remember having any time to react,” he said. “I was aware that I was in trouble, and then on the ground bleeding.”

What’s the old saying? “There are two kinds of cyclists: Those who have crashed, and those who are going to.”

Keep the rubber side down.

During the coming week, Bike Noob will feature two more posts in the series, What’s the Most Important Thing You’ve Learned About Cycling? If you’d like to submit your thing, check here.