I got up too late to make the Sunday morning club ride today (Which was pretty eventful – details farther down), so I decided to stick close to home and do a neighborhood route that wound me up at the Veloway.

And who should I see there but Mike Watts, a regular commenter on this blog under the nom de guerre “Sine Botchen.” I’ve enjoyed his input, because it comes from the point of view of a long-time mountain biker, who seemed to feel at home on a blog that caters primarily to roadies. We’ve met on the Veloway before, and he was able to easily outpace me on his 29-inch MTB.

So I was pleasantly surprised  to see a Tweet from Mike that he’d bought a road bike. He’s had it for a few weeks now. We decided to ride a few laps together. 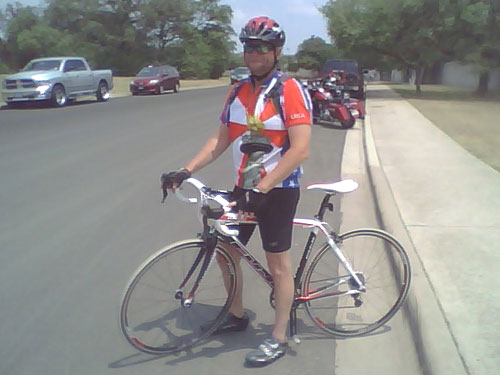 The bike is a Fuji SL-1 Pro with a Shimano Ultegra drivetrain. It’s a carbon fiber frame, and he says he’s amazed at the quality of the ride. But it does take some getting used to, after 20 years on a mountain bike. He’s bothered about battling the wind we’ve had to put up with around here for the last two-plus months.

The lightness of the bike and the different riding position (hands out over the front wheel, a more vertical fork) makes the bike “twitchy,” says Mike. Going into a corner and getting buffeted by a crosswind is a feeling he’s not used to yet. He’s confined his riding to the Veloway, because he’s a little uneasy about riding in traffic on highways with a stiff wind.

“Why did you decide to get a road bike?” I asked.

“The guys I used to mountain bike with have all moved on in their lives,” he replied. He found himself riding almost solely on the Veloway, which is a smooth, paved track. “I realized the mountain bike was not the right tool for the job,” he said.

“So what’s the biggest difference between riding a mountain bike and a road bike?” I wanted to know.

“You know, I thought it would be the lack of suspension,” he said. “But that turned out to be the least different thing.” The big difference, he said, is how subtle the road bike is when responding to the pavement.

He had a few questions for me. “How do you loosen the brakes?” he asked, “if I want to get a wheel off?”

I showed him the quick release for the brakes.

“I got an owner’s manual with the bike,” he said, “but it was full of basic stuff like ‘Always wear a helmet’ — lawyer protection stuff. Nothing about operating and maintaining the bike.”

I’ve got some time off coming up, and we agreed we’d get together again and this time take his bike out on the roads. I’ve got some area routes in mind that will really show him what his road bike can do. In the meantime, though, he said he’d keep riding four days a week — and finish making the transition from mountain biker to roadie.

Like most bike blogs, Bike Noob has dealt with the issue of dogs before. But today really put that issue into perspective.

The Sunday morning club ride headed out to Creedmoor, a crossroads southeast of Austin. I had planned to ride with them for the first time in months, but couldn’t get my act together in time to make the start.

About 12 miles into the ride, a small terrier of some kind got loose and rushed at the group, targeting the two lead riders. It hit one bike broadside, knocking him over, and careened into the second bike, taking it down as well. The other riders missed the pileup, but at least one ran over the dog, who limped away, badly hurt.

An ambulance came for the two downed riders. Both were in considerable pain. It turned out both had fractured pelvises and are spending the night in the hospital (one of them happens to be an emergency room physician at that same hospital).

Police ticketed the dog’s owner for an unrestrained dog. Neighbors said the dog is always running loose. Mrs. Noob says I should confine my riding to the Veloway from here on out.