Back in March, I wrote about Rivendell Bicycle Works, and their different approach to building bikes. Bike Noob reader Mel Hughes, who comments here occasionally, recently pulled the trigger and ordered one. He went for the A. Homer Hilsen model, their top-of-the-line bike. In this guest post, Mel gives his impressions of owning and riding a Rivendell.

When I started thinking about doing more with my bicycling than just training, I started looking for a bike that would be comfortable to ride but versatile. I wanted a more upright position, more braze-ons for accessories, and wheel and tire combinations that did more than just roll fast. I wanted a bike I could use as a daily commuter for my 20 mile round trip to work. But I also wanted a bike that would also work well for long weekend rides. The more I looked around and read, the more I kept coming back to Rivendell.

Rivendell’s approach to frame sizing is a bit different. They use pubic bone height (PBH) as a starting place. Using this measurement generally puts people on a bike an inch or more taller than they had been riding before. The stand-over clearance is narrower. But the increased height allows an overall more upright position (if desired.) The frame is also built to easily allow using wider, fatter tires, fenders, racks, and even a kickstand. The frames are steel, joined with brazed lugs. The front forks are traditional, lugged crown forks.

If this sounds like a formula for a touring bike of the late 1970’s or early 1980’s, it does have that lineage. But a closer look at the head tube and some of the other frame conventions will show that Grant Petersen has taken those ideas and used the best of them only as a starting point. Rivendell frames are currently made by Waterford for Rivendell, here in the U.S. 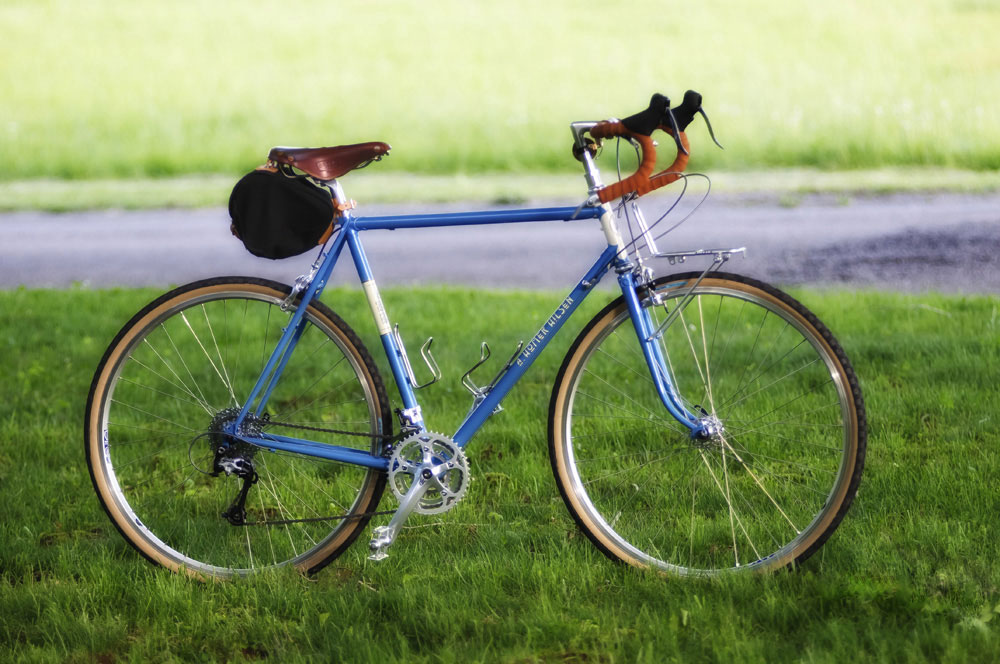 I ordered a Rivendell A. Homer Hilsen this past January. The bike was delivered mid-April. I have had some good opportunities to ride in between the crazy weather we have had this spring in Tennessee. The 33mm tires run at 85psi smooth out the harshest cracked pavement we have. I placed my handlebars just above the seat height and have to report that my lower back pain has almost completely disappeared. The Dura-Ace bar-end shifters run the 9-speed cassette and triple ring crank flawlessly using a Campy front derailleur and a Shimano Deore XT rear. While the 36 spoke Velocity Synergy rims will never win a weight contest, they are extremely durable. The rear rim is off-set so that there is a minimal amount of dish on the cassette side. This allows spoke tensions on either side to be much closer to each other, making for a stronger wheel. The Phil Woods hubs are more than bike jewelry. Their bearings are like silk!

I have been riding using MKS touring pedals. They allow me to wear sneakers when commuting to work. They also remove any question about clearing my foot from the pedal in an emergency. My knees have also been very happy with them. In truth, I haven’t missed my clipless pedals. It also promotes just hopping on the bike for a quick run up the road anytime.

All in all, I love this bike! It is beautifully made, reminding me of bikes I used to dream about years ago. It is very well thought out, classically designed, and wonderfully executed. It rides like a dream. I am a couple of miles an hour slower than on the more race/speed oriented Litespeed. But I find I am much more comfortable. I have had more fun than should be allowed dressing it up a bit with racks, bells, leather bar tape and other things. Rivendells aren’t everyones’ cup of tea. But if you are looking for a bicycle that can do many, many things very well, they might just have a model that has your name on it.

For more pictures of Mel’s bike, go to his Flickr page.