A couple of weekends ago, I was out on a ride with an old friend. Before we started, she pulled out a bandana and tied it around her handlebars.

“Oh, I have terrible allergies,” she said. “I have to keep this close so I can blow my nose.”

Yeah, allergies are bad this year. The latest National Allergy Forecast shows medium-high levels across the northern tier of states, and much of the rest of the country has medium levels. So cyclists – and lots of others – might have to contend with runny or clogged noses. That’s tough to do when you’re putting miles behind you.

That rather uncouth term describes clearing the nose without using a handkerchief or tissue. It’s fairly simple. 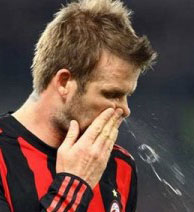 1. Move your left hand to the top of the bars.

2. Place a finger of your right hand over your right nostril. Try for an air-tight seal.

3. Turn your head. You want to make sure you don’t hit yourself.

4. Check for other cyclists. You really want to make sure you don’t hit them, either.

5. Blow. Hard and short. There should be enough force behind the blow to push the detritus away from your body, so the speed of your bike will carry you past it.

6. Switch hands. Repeat the process on the other side.

7. Clean up. This is where those terry cloth “sweat pads” (yeah, right – we know what they’re really for!) on your gloves come in handy.

It’s not a good idea to let fly if you’re in the middle or front of a group ride. Drop to the back so you don’t accidentally catch other cyclists with your projectile.

My friend has to wait until we stop for a rest before she can undo her bandana and use it. If she learns to blow a snot rocket, she can ride through allergy season breathing deeply.