It seems like the cycling media has had a lot to say in the last year or so about the advantages of a truly cold drink to keep you performing your best. And while I know there is no shortage of physiological reasons to back up that claim, I also know that, from a purely practical standpoint, when it’s 95 degrees out and I reach for my bottle I’d much rather be rewarded with something still a little icy rather than discover liquid with the temperature of bath water.

The catch? In serious summer heat, after more than an hour of riding, not many bottles seem to be up to that task. 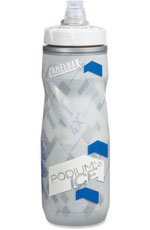 That’s why I was eager to test Camelbak’s Podium Ice bottle, which promised to keep things chill. Like many insulated bottles, the Ice features a double-wall construction. Camelbak fills the resulting void with Zero-loft insulation, claiming it keeps the contents cold up to four times longer than a standard bottle, and yet retains the soft feel that allows for a quick squeeze out on the road. I can verify the latter claim immediately. I’ve tried other insulated brands and found them stiff and difficult to use when you may only have seconds at a stoplight during a group ride. In contrast, the Ice is very soft and is easy to squeeze on the fly. I can also even somewhat support Camelbak’s typically heftier price tags, as I’m a big fan of their Jet Valve, which keeps the contents of your bottle where it belongs until you need it, and doesn’t require me to wrestle with a push-pull top when out on the road. Camelbaks are also made from BPA-free polypropylene, and don’t retain tastes or odors.

But does the Ice really keep things cool enough to verify yet another price bump over the Camelbak’s already premium price tag?

If I freeze some water or Gatorade before a ride, I can still find some cold refreshment in the Ice even after two hours in the saddle during a Florida summer. At that stage of the game, my normal water bottle is disgusting. But that’s not too scientific a shootout so I decided to stage my own little duel. In one corner was my plain, non-insulated Camelbak Podium and in the other was the Ice. Knowing that not everyone is a fan of freezing a bottle, I simply threw four ice cubes into both, filled them with water, and then set them outside in the sun on an 85-90 degree day. After 30 minutes, the temp measured 68 degrees in the non-insulated bottle, and 50 in the Ice. After 90 minutes, the non-insulated bottle had risen to 76 degrees, while the Ice sat at 60.

Is that enough of a difference for the cost? Given the combination of the Jet Valve, the soft, easy-to-squeeze plastic, and the insulation, I’ll say yes…although I cringe knowing plenty of you will now tell me how silly I am for spending $20 on a water bottle.

Still, I’ve yet to find anything better in our brutal Florida summer heat.