I call this blog “Bike Noob” with tongue firmly in cheek, because I doubt many of us are truly noobs on the bike. We had them as kids, didn’t we?

When I was growing up, my best friend  was a guy named Steve. He lived up at the end of our block. We did everything together, including bike riding. He recently sent me a picture he’d dug out of an old photo album. Suburban Chicago, we think about 1964. 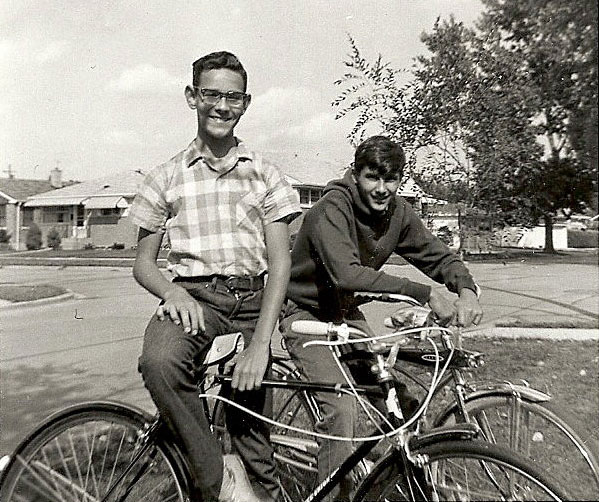 Yep, that’s the Noob on the left, in all of his 13-year-old geekiness. I’m perched atop a Royce-Union three-speed, what we used to call a “racer” bike, because they were so sleek and light and fast compared to…well, compared to the Huffy my friend Steve is on.

Cable routing seems to be an issue for me, although I was blithely unaware of it at the time. The prominent white cable that swoops down and back leads from the headlight to a rear wheel-mounted generator — the kind that spins against the tire sidewall to power the light. It worked great, too. That light threw a nice bright beam. The shifters were twist grip. It would be a fun bike to have today, for toodling around town.

You’ll notice Steve is no slouch either when it comes to lighting. His Huffy has dual headlamps mounted at the end of his frame tank. Very stylish, in a 1960s Detroit Iron kind of way.

Two highlights of our bicycling occur to me.

We raced. Oh, yes. We’d go over to an elementary school a couple of blocks away, and race our bikes on the asphalt playground, using the borders of the two basketball courts as our “track.” Because the space around and between the courts was pretty narrow, we had a special rule: The lead bike picks the route. You could take a Figure-8 around the courts, or a big circle. You could go clockwise or counterclockwise. This made it imperative to pass whenever possible, or you wouldn’t have any idea which way the other guy was going to turn. At least once every race, one of us would lose control and crash. Helmets? Never heard of ’em.

About this time, we also got adventurous and made regular trips to a discount department store that always had good prices on model cars and such. The store was two towns away from ours, and we charted a route through back streets and side streets, until finally coming out on a busy thorofare about a mile from the store. The trip was about five miles one way. I even recall a challenging hill on our route. We’d fly down it on the way out, but have to struggle up it, carrying our purchases, on the way back.

I never really stopped biking. Sure, there was the hiatus after getting my drivers’ license. But I had two bikes during my college years (both of which were stolen from me) that I rode to class and took on excursions out into the country on weekends. My wife got me a Raleigh ten-speed for my 30th birthday, and we did some riding on bike trails throughout our adult lives. It was only with the purchase of my current bike that I threw myself into “serious” cycling. But I’m still learning.