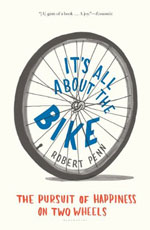 I’m an avid reader, and I try to vary my reading enough that I’m not a single-subject guy. History and mysteries are favorites. But every once and a while, I have to indulge my biking side and tackle a book written by (but not necessarily for) cyclists.

So when I was offered the opportunity to read “It’s All About the Bike” by Robert Penn (New York: Bloomsbury, $20), I jumped at it.

It’s a very simple premise: The writer, a resident of Wales, has been an avid biker for most of his life. He pedaled around the world when in his twenties. But now, he’s after his dream bike — the one bike that will last him the rest of his life. And to get it, he’s having components manufactured by the best at their crafts — wherever they might be.

For Penn, the bike of his life will be a racing-style bike, but he’ll ride it for everything — commuting, long distance rides on the weekends, even longer trips to cycling’s storied routes. He won’t settle for humdrum materials like carbon fiber. His frame must be custom built. He picks a lightweight steel frame hand built by Rourke in England. He travels to the United States for a headset from Chris King and wheels from Steve Gravenites (“Gravy”), then to Italy for a drive train from Campagnolo (Record). Back to England to see his Brooks B-17 saddle made at the Brooks plant, much the same as they’ve been made since 1896.

But something happens as Penn travels the globe to build his bike: He delves into the history of cycling and the components that make the bike what it is today. The reader is introduced to Baron Karl von Drais de Sauerbronn, the inventor of the “Draisine.” That was the first machine that looked something like the bike of today, even if the rider had to push it over the ground with his feet. And James Starley, who came up with the idea for tangent-spoked wheels, the kind we still ride on today. We learn how Tullio Campagnolo invented the derailleur. And at the end of it all, the reader understands just how much goes into the creation of a bicycle, and where it all came from, and how it all evolved.

For that reason, non-bikers might enjoy the book, too. Penn is a journalist who writes for a variety of different publications, and his writing is erudite but accessible. The book is relatively short — 186 pages — and most people will get through it in just a couple of nights. It got me thinking about what my ultimate bike might look like. I was left with one minor disappointment though. There’s no picture of the finished bike. Readers will have to conjure that up on their own.