In a two-part guest post, Don Blount expresses thoughts I’ll bet many of us share when it comes to climbing hills. 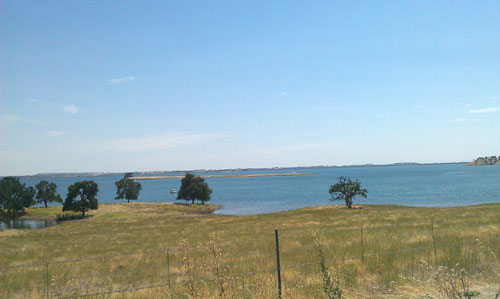 Beautiful scenery goes along with riding in the hills, including this view of Camanche Lake in Amador County, California.

I have always suspected that hills hate me. Maybe not when I am walking or driving a car, during those times they seem friendly enough. But the moment I approach a hill while riding a bike, it seems that hill’s goal becomes to not allow me to get up to the top of it. Sometimes it throws me down with a vengeance, causing me great pain and suffering.

Being a peaceful man, I usually take the path of least resistance and avoid hills. That’s easy enough where I live as I can ride for miles and not approach a grade of more than 4 percent.

For the most part, I am fine with this. I do not consider myself a climber. At 5-feet, 9-inches tall and 194 pounds, I am much more comfortable on the flats and inclines. If it is short enough for me to power up with my compact crankset and 12-25 cassette, then I am game to ride it.

To get to real climbs with grades of 8 or 9 percent or more, I have to travel about 23 miles east to the foothills of the Sierra Nevada mountains in Northern California.

Rarely are those hills friendly and allow me to leave with my dignity. Most of the times they are hard and determined to show me that I am not welcomed there.

So wanting to test my fitness I joined a late May club ride of 40 miles with about 2,300 feet of climbing. I survived but barely. Most of the ride I had a good look at just about everyone’s back.

After that ride I decided to commit to becoming better in the hills. A few weeks later I returned alone and did a similar solo ride of about 40 miles with 2,300 feet of climbing. I completed it.

I became a student of climbing. I read what I could find I watched videos. I watched real climbers. I meditated on climbing and channeled those who had worn the polka dot jersey.

And I went out on the club ride that kicked my rear earlier. I was in better condition, I used what I had learned, and I completed the ride successfully. Progress I thought. Maybe the hills did not hate me after all? Maybe it was time for another test, a club ride?

I put it on my schedule but oh, how little did I know that deep down hills are evil.

Watch Bike Noob for the second part of Don’s saga of the hills.