I’ve always considered myself to be pretty competent when it comes to fixing flats. I’ve had enough of them that, while they will be forever a pain in the patootie, they don’t ruin my ride like they might have done several years ago. 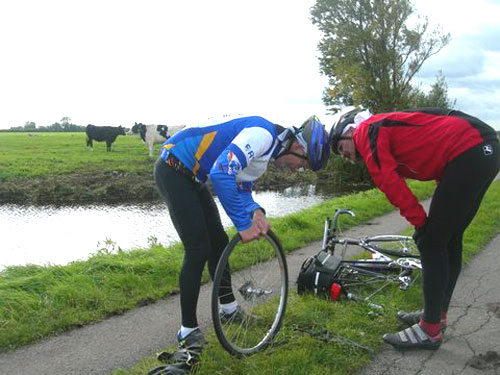 But my confidence in my flat fixing ability was challenged earlier this month, when I had a spate of them within a relatively short time. I had three flats in two weeks. It turns out that my rear tire had worn so badly, the cords showed through in two places.

What vexes me is this: I take too long to fix flat tires.

I think I go about it just as most other folks would. I shift into the smallest cog and the smallest chainring, then take off the wheel. My seatbag contains three tire levers, and I usually need only two to get the tire out of the rim. I’ll pull the tube out, keeping the other side of the tire inside the rim, then I feel around inside the tire to see if I can find any bits of glass or metal or whatever that might have caused the flat.

I take the replacement tube from the seatbag, and blow a little air into the valve to give the tube a little shape, then fit it inside the tire. Once I’ve got the tube inside, it’s time to grab the part of the tire that’s outside the rim and pop it back in. As always, I have a little trouble getting the last three inches of the tire over the rim, so sometimes I’ll use one of the tire levers to help with that (Yes, I know — could cause a puncture in the tube). Pump up the tire, put it back on the bike, clean up after myself, and I’m off.

I can do this in five minutes. Well, I have done it in five minutes maybe once. More often, it takes 15 minutes. But when I had the flats this past month, I noticed it took me a full half hour to get underway again.

I can’t pinpoint the exact cause of my slowness. But two weekends ago I realized that tire changing was not being done as efficiently as in the past. Whatever the cause, I have to get quicker at the whole roadside repair routine, so I can get moving again quicker.

I suppose I could practice, and build my speed that way. Have you ever practiced fixing flats? (Okay, when I started biking seriously a few years ago, I really did practice it — but only once, and never since.) But really, I’d rather wait until faced with the real thing before I dirty my hands doing that chore.

So, readers — I’m asking for help. What kind of techniques do you use to fix a flat quickly and get out on the road where we wanted to be in the first place. What’s the best part of the routine to cut the amount of time I would spend getting the tire changed?