Temperatures here in Texas are finally starting to moderate. Our overnight lows are positively fall-like, with overnight lows expected to plunge to 68°F (20°C) next week. And when the weather changes like that, we can look forward to some of the better organized rides of the year. 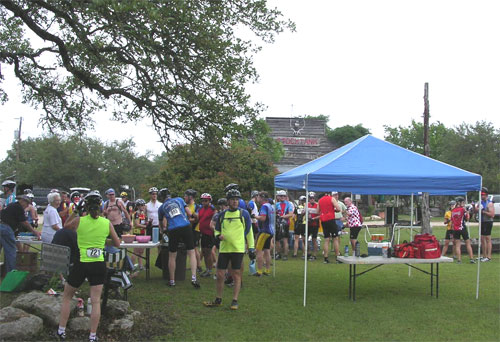 Okay, I’m being a little sarcastic here. But the good rides do start up again in the fall, and I realized too late that I haven’t been pointing toward any of them. For two of the last three years I’ve done the Outlaw Trail 100, which is on October 8 this year. I’m going to pass on it this time around. I just don’t have the mileage base that would allow me to finish 100 comfortably. I’m sure I could finish it uncomfortably — I just have no desire to. Another century I’ve thought about trying is the Waco Wild West in Waco. But that’s in late September — too soon for me.

Realistically, the time to start planning on those fall rides is in mid-summer. Last year wasn’t a problem because our weather was moderate by Texas standards. This summer has been the hottest on record, and while it’s been easy to get in some good hour-and-a-half to two-hour rides early in the morning, anything much longer than that gets you into the really hot temps of the day. I have no enthusiasm for that. So my mileage has suffered this year, my time in the saddle is down, and my overall cycling fitness ain’t what it used to be. There’s always next year.

However, there might still be some rides worth attempting. A couple in November offer possibilities. The Tour de Gruene (green) is a weekend-lomg event in New Braunfels, Texas. There’s a race, an individual and team time trial, and a recreational ride along the scenic Guadalupe River. Maybe the river will have water in it again by November. It’s a ride I haven’t done, but have been thinking about trying. Another is the Austin-to-New Braunfels “Wurstride.” It’s a good 60-miler, and was the scene of my first metric century four years ago. I haven’t been back since. It might be time.

So, getting started to prep for these rides at this late date means I have to build my mileage again. My “long” rides this summer have averaged 30-40 miles. Time to extend that distance. They say a 10 percent increase each week will do the trick — both in weekly mileage and in the length of the long ride.

And what the heck. I declared at the beginning of the year that organized rides no longer held much interest for me, and while it’s true that I’m not crazy about shelling out 50 bucks just to ride with sag and food stops, I can still do those same routes on my own — just making arrangements to be self sufficient. But I like the group ride. The atmosphere is fun, I get to see folks I don’t see on the bike that often, and I get to ride routes I don’t ride that often. I’ll probably do at least one or two of the better ones around here.

How about you? Do you have a favorite must-do fall ride? When and where?