Back in May, I reported the one-year results of my experience with my WTB Speed V saddle. While I thought the saddle offered more or less the comfort I was looking for, I was dismayed that the vinyl covering the seat was starting to separate.

Here we are four months later. Lately, I’ve noticed some discomfort on weekend rides. I’ve been getting saddle sores more often. I figured the saddle was the culprit, but also figured that I could hold out for awhile before taking any drastic action.

Then came Saturday’s ride. It was another of those Mamma Jamma training rides I’ve reported about before. I was looking forward to it, because it uses roads about 30 miles from my house. Because of that, I don’t ride them. But I do enjoy riding in that area, because you get out in the country immediately, the roads are little traveled, and the drivers are polite — they wave at cyclists!

I was having a good ride. The people in this group ride a little slower than those in my club, so I could settle into a comfortable pace and be at or close to the front. We were doing the 41-mile route. At a rest stop at mile 20, I felt some soreness where my derriere contacts the saddle.

I took a look at it (the saddle — not my derriere). The tearing in the vinyl cover was quite a bit worse. 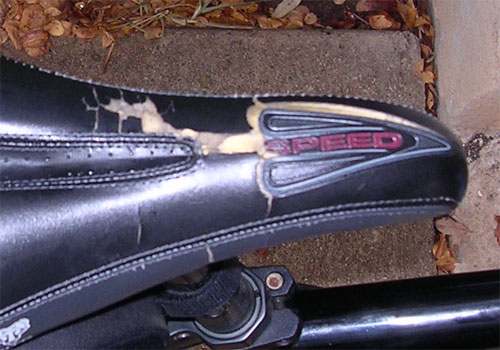 What the seat looked like after Saturday’s ride. The torn edges of the vinyl rub uncomfortably on the youknowwhat.

The second half of that ride was not as carefree as the first half. I found myself standing on the pedals often, just to relieve the soreness. I got to the finish in good enough shape — second in our group (It’s a ride, not a race!), and proceeded to enjoy the snacks and bottled water waiting for us there.

But it was clear to me that something had to be done. We had a club ride of similar length scheduled for today, and I knew that if I attempted to go on that without attending to the saddle I could be in for an unpleasant time.

Then I got it. Duct tape. I pulled out a roll, ripped off two pieces, and covered the ruined vinyl. Would it work? It looked awful. 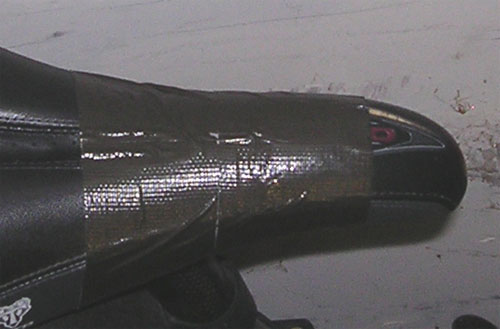 It ain’t pretty, but it seems to do the trick.

But it did work. I got to the turnaround point on today’s ride and felt pretty good. The tape hadn’t separated, as I was afraid it might. It smoothly covered the uneven spots on the saddle. I finished strong — although I’m sure our more moderate fall temperatures had a lot to do with that.

A popular web site lists 252 different uses for duct tape. Today, I found use #253. It will tide me over until I can find a more permanent replacement for the saddle, but I now know it works well enough that I can take my time looking and find just the right replacement for me.