Okay, here we are in November. In most of the country, it’s pretty chilly now. Lots of bikers are moving to their basements, setting up their trainers, and starting the winter ritual of putting in stationary miles.

For those of us in milder climes, the cooler weather is welcome after a blistering summer. But even though we get to ride outdoors year round, it’s time to start thinking differently about riding. 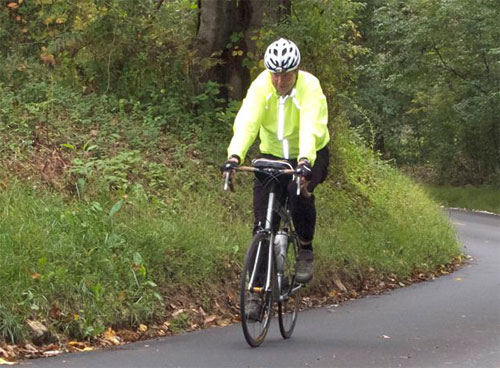 Now, why would we want to train in Zone 2, a relatively easy pace? Because we’re at that time of year where speed doesn’t matter. Most of us aren’t training for a race, or an organized ride, or even an extra long ride. What we’re really doing is building our base for the next season’s riding. In addition, the slower pace will have your body burning fat rather than glycogen.

Heck, that’s the kind of riding I tend to do most often anyway. In Zone 2, I have to remember to shift into really easy gears when climbing hills, because I don’t want to reach the top huffing and puffing. In fact, when I’ve done Zone 2 training in the past, I’ve always pedaled in easier gears, because I can spin at a higher cadence that way.

In another sense, Zone 2 time is a relief, because I know I don’t have to push it. I just have to get out there and put down some miles. The more I can do that, the better prepared I’ll be come spring, when it will be time to start pointing at some riding goals.