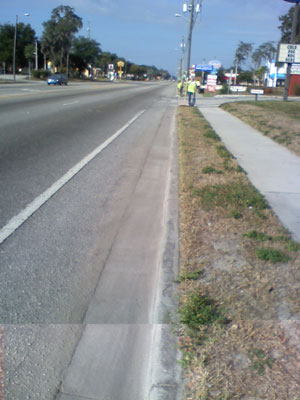 Normally, I’m a fan of bike lanes. In my area, which is a subrban-style neighborhood, they’ve been striped on most of the arterials. It’s reassuring for me to know that if I stay in my lane and the cars stay in their lane, we can all just get along.

That rose-colored glasses view of bike lanes fogged over last weekend when I was on a short ride with my wife. We do a nine-mile round trip from the house. It takes only about 40 minutes, but she considers it a good ride, and it’s often the only ride I’m going to get anyway, so I’m happy to do it. We ride the bike lane along a broad, two-lane street out to a busy highway, then turn around and double back.

I like to crank it up on the way back. There’s a nice stretch of almost two miles that’s a little bit downhill, and it’s easy to build up some decent speed. I’ll usually charge through there and then stop to wait for Pat at the last side street before we have to make a left turn at a stoplight and head home.

So I was moving at a pretty good clip, approaching a side street that entered from the right. Without warning, a white Toyota Camry sped up to the intersection. The driver was looking to his right. I was coming from his left. Instead of stopping even with his stop sign, he kept coming until the nose of his car was sticking out into the bike lane — just as I got there.

I flicked the handlebars over and passed in front of him. He didn’t see me until I was right on top of him. The whole thing happened so quickly, I didn’t even have time to yell, “On your left!” or some such thing.

The situation could have been very dangerous. Well, it was, but it could have had serious consequences. When I moved to my left to avoid him, I darted into the traffic lane — without looking. I had no idea if a car was behind me in that lane or not. (I had a pretty good idea none was, since I had not heard anything. But with today’s quiet cars, you never know.)

As I continued riding, I thought about the close call. I was still thinking about it about a half mile down the road when sure enough, another car — this time a black Mercedes driven by a soccer mom type — enters the intersection from the right, and doesn’t stop until it’s completely blocking the bike lane. This time, I wasn’t quite as close as in the first incident, so my move into the traffic lane was done more deliberately, and I even signaled my move –but I still didn’t look for cars coming up behind me.

Now, I suppose I could make the argument that I should always just take the lane anyway and not both about bike lanes. But I don’t think that’s necessary. I prefer to maintain an entente cordiale with motorists, and in four years of riding along that street, I really haven’t had much to complain about. But an entente implies that two parties are involved, and I’d sure like to see drivers acknowledge that marked bike lanes are another traffic control feature that must be observed, just like yield signs and double yellow lines.

In the meantime, I’ll be riding that route with a heightened sense of alertness.