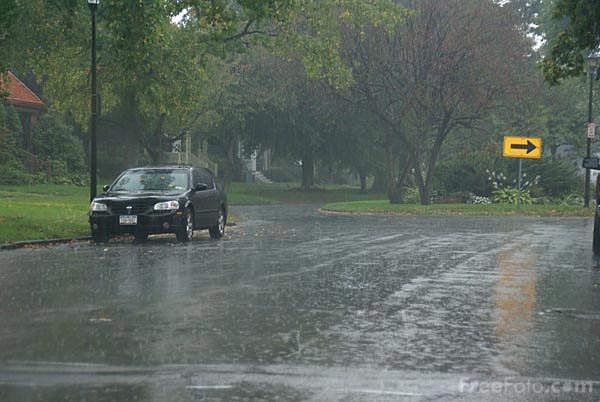 It started raining Thursday night, then continued on and off on Friday. By the time I headed home late Friday afternoon, the rain was heavier. I wouldn’t get a chance to take my Friday after-work ride this time around.

On Saturday, the rain fell harder. My wife and I were delighted. This is just the kind of rain we’ve been hoping for here for over a year. The extraordinary drought Texas finds itself dealing with has led to water use restrictions throughout the state. Some small municipalities are in danger of losing their local water supplies. So the rain is really a good thing.

It kept falling Saturday afternoon, and seemed to gain intensity.

“Can we sneak in a short ride?” asked my wife. She’d been working at her home-based business all morning, and needed a break.

“No, it’s still coming down,” I replied. Any riding was out of the question.

Neither of us like riding in the rain. Pat simply won’t do it. I will start a ride in iffy weather and hope the rain holds off, but if it falls while I’m out there, so be it. I’ll deal with it. However, I always bear in mind that the last serious crash I had was during a rainfall. So if it looks like I could get caught in the rain during a ride, I’ll just stay inside.

Saturday night, we were at a party hosted by some members of my bike club. Although it was a holiday party, much of the chatter was about bikes and biking. No one was enthusiastic about riding Sunday morning, except, of course, our club president.

“You must have a beater bike you wouldn’t mind getting wet,” he said. “I’ll be out there on my rain bike.”

“Have fun,” I told him. It looked like he would be the only one riding Sunday morning — if he decided to follow through on his pledge.

If anything, the rain fell harder on Sunday morning. It was 48 degrees when I woke up (about 9C) and the forecast said the temperature would fall along with the rain all day. I visited my bike in the garage and changed the batteries in the headlight.

So here I am Sunday evening, and the rain is spottier than it’s been all weekend, but there’s still a chance we’ll get some more before midnight. And a good chance for more rain Monday. As far as putting any miles on my bike are concerned, I’ve lost the chance to do that this weekend. Too bad. I managed to sneak in over 300 miles in November, and wanted to get a good start on December to do at least that many.

But there’s a silver lining. We’re at the end of the fall semester, and I’ll have some time on my hands during the week in just a few more days. So I guess I’ll accept the lack of riding this weekend, knowing that our grass might green up again and that I’ll be getting in some miles later this week. When you’re as used as I am to riding in decent conditions pretty much year around, a weekend off is tough to take.