What do you use down there? Guest poster Jeff Hemmel has some stuff you might not have heard of.

I used to ride sans anything slippery in my shorts, then followed my local bike shop owner’s suggestion to try chamois cream as I began to put in more and more miles. Now, spending a LOT of time in the saddle every month, I’m a believer in that weird glop known as chamois cream.

I’ve tried quite a few, even did a little “chamois cream shootout” for this blog a year or two back. But my new favorite is a lesser-known brand dubbed Doc’s All-Natural Chamois Cream (www.docscycling.com). 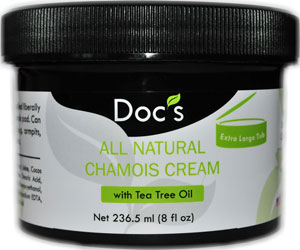 All you Texans will probably appreciate the fact that Doc’s is actually made in the Lone Star State, but what I liked about it is that Doc’s is made by, you guessed it, an actual doctor. A practicing physician who is also a Cat 2 racer, this Doc wasn’t thrilled by the price and questionable effectiveness of chamois creams he found on the market, so he decided to whip up his own. Doc’s All Natural Chamois Cream lists no artificial or petroleum-based ingredients like so many chamois creams, but instead relies on stuff like Witch Hazel and a strong concentration of Tea Tree Oil to fight grunge, and Aloe and Coconut Oil to prevent chafe and keep your skin happy.

I found Doc’s while looking for a product similar to Dave Zabriskie’s DZnuts, which I like but find too expensive for regular use. Doc’s follows a similar all-natural route, but gives you an 8-ounce jar for about $20, less than half the price of DZnuts and on par with bike shop standbys like Chamois Butt’r. At first glance Doc’s product seemed just a tiny bit thinner in consistency than some lubes, but after months of use I’ve had no problems with saddle sores, even at the height of the summer, so guess I’m a believer.

Yes, I realize there are cheaper alternatives, from Bag Balm to Aquaphor. But I like the natural ingredient idea, particularly on something I use often, and appreciate that Doc’s appears to wash cleanly out of my shorts. A jar has also lasted me quite a while, so my “cost-per-ride” has been pretty cheap.

Currently the product seems to be available at a few Texas bike shops. The rest of us can find it on Amazon.