Here’s a weird one: When I went into the garage early Sunday morning, with an idea to get the bike ready for the club ride that I never went on, I discovered this: 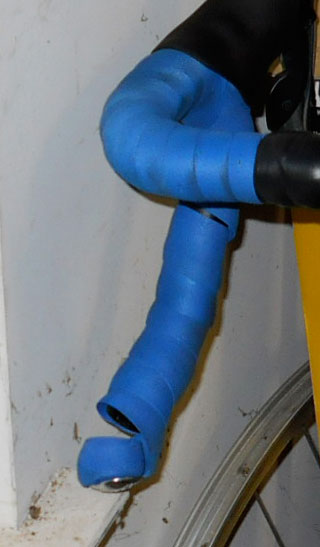 For some reason unknown to me, the bar end plug had popped off overnight, unraveling the bar tape. When I put the bike away after the last ride, Friday, it was okay. When I was in the garage to get into the car Saturday, it was okay.

I haven’t any idea. I had taped the bars some time ago, probably in early fall, and hadn’t had any trouble with them since. I had even taken a scrub brush to them the last time I washed the bike, and got off most of the dirt smudges. The bar end plugs had held the tape in place much better than some of my previous tape jobs.

My next reaction was that I had to fix it, and fast, if I planned to ride that day. I’d already decided the foul weather would keep me from doing a club ride. Logically, I would have waited a few hours until the bike shops around here opened for their short Sunday hours, then picked up a new roll of tape.

But sometimes, I don’t think logically.

I removed the tape. It looked to be in reasonably good shape, so I decided to use it again.

Now, the usual advice you get when you go online for a refresher on winding bar tape is not to reuse it — get new stuff. I can understand that. But the tape wasn’t torn or otherwise damaged. I started winding it on the bar, paying close attention to the amount of tension I kept on the tape. You want it to be taut. You don’t want it to be so taut, it tears. I managed to stay on the good side of that fine line and got the tape rewound on the bar. Heck, it would look new, except that the rewind had uncovered some grungy dark areas that will have to be scrubbed clean again.

By the way, this is not high end bar tape. This is the run of the mill stuff I picked up at Performance. It’s a cork gel, and costs only about $10 for enough to do both handlebars. I like it. I like spongy tape that provides some cushioning, and this does that. Some riders say they prefer a harder tape that transmits road feel back up to the hands. I’m perfectly happy with the feel I get from this tape.

I’ve ridden the bike a couple of times since retaping the bar. It’s holding well.

Have you ever reused old bar tape? What were your results? Did it last as long as you’d hoped, or did it break down in a short period of time?