For the last few weeks, I’ve been dealing with some minor pain. It started on the LBJ 100 ride, I think. The day after the hilly metric century, I experienced some soreness in my left elbow when I went out for an easy recovery ride. It’s not a big deal, but it is a noticeable twinge.

I thought it might have something to do with the way I held my arms during the long ride. Maybe I was pushing the elbows too far out for help on the hills. I noticed that if I kept my elbows in, the soreness went away. 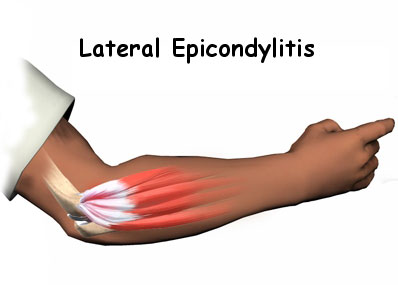 I hadn’t realized it before, but I have Biker’s Elbow. No, although I capitalized it, that’s not its real name. It’s called “lateral epicondylitis.” You might know it better as “tennis elbow.” The American Association for Hand Surgery (Yes, it’s a real organization) says despite the name, most people who have tennis elbow have never played tennis. And if you want to get into the medical minutia, lateral epicondylitis is considered a form of tendonitis — but it isn’t really, because it doesn’t involve inflammation. It’s considered more a mechanical problem related to degeneration of the tendon that passes over a bony protrusion on the elbow.

What causes it? Repetitive motion. Any activities that repeatedly stress the same forearm muscles can cause symptoms, according to the orthopedic-oriented website, Orthogate. So besides swinging a tennis racquet, such things as running a chain saw, or using a paint roller can have similar results.

Now, cyclists don’t repeat motions much. Their hands are mostly on the brake hoods or in the drops. But it turns out that gripping can cause the same kinds of pain. Again, according to Orthogate, “When you bend your wrist back or grip with your hand, the wrist extensor muscles contract. The contracting muscles pull on the extensor tendon. The forces that pull on these tendons can build when you grip things.”

Treatment is simple in simple cases like mine: rest. (Duh.) Aspirin or ibuprofen should help. If it’s more serious, you’d better be talking to a doctor, because then treatment will involve everything from stretching exercises to physical therapy to, in extreme cases, surgery. Most disturbing was this advice from the Hand Surgery website: “It is recommended that activities that aggravate the symptoms are limited.” What, no biking? No way!

Since the LBJ ride, I’ve felt that twinge in my elbow on every ride. But on every ride there’s less of it. On today’s after-work quick 15 miles, I felt it once, moved my arm a little bit, and didn’t feel it any more. Knock wood, but I think the situation is under control. But you can be sure that I’ll be very aware of how tightly I grip the handlebars from here on out.