A couple of weeks ago, my friend David mentioned that his steel Fuji was still available for me to test ride a while. David now rides a carbon fiber Giant Defy Advanced, and loves it. But he loved his Fuji, too, and thought I would enjoy comparing it to the ride I get on my Specialized Allez. So, I swung by his house to pick it up.

The bike is a Fuji Marseille from the early 2000s, and in some respects, is similar to the 2008 Allez. It’s the same size: 56 cm; it has a nine-speed cassette, although his is Shimano Ultegra and mine is 105. The Allez has more carbon fiber parts, with fork, seat post, and seat stays all being of that material. Only the Fuji’s fork is carbon. The Fuji’s top tube is horizontal, while the Allez’s slopes. David runs 25 mm tires on the Fuji, while I am currently sporting 23s. 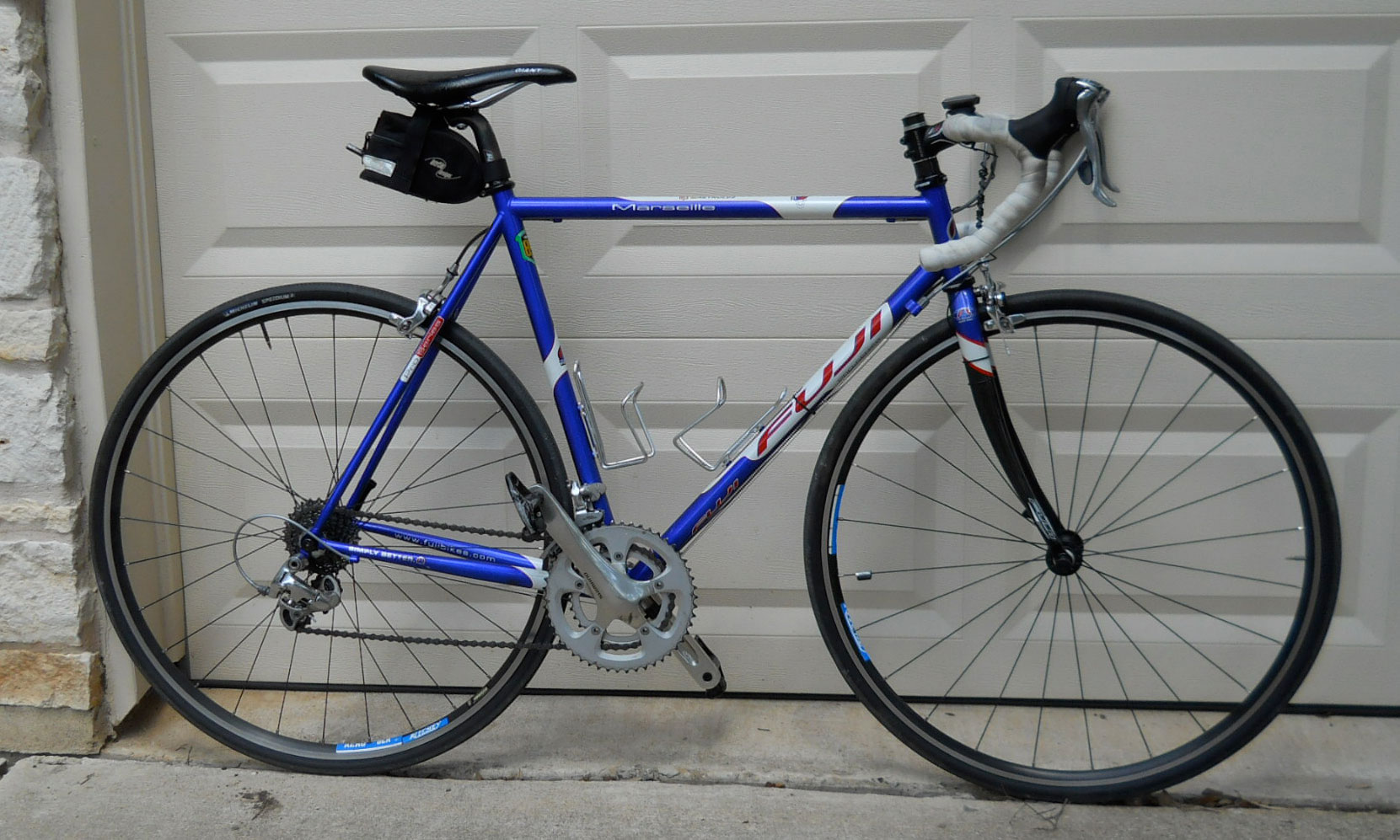 Digging through some Road Bike Reviews from 2004, I found the bike variously described as comfortable, a good century bike, not fast or light, built for distance — not speed, a great bike for club rides, and smooth.

The whole point of my trying out the Fuji was to see for myself if there is a difference between an aluminum-framed bike and one of steel.

I had my answer after my first mile: Yes, there is. The steel bike rides smoother.

The difference was most apparent on chip seal roads. Those aren’t a lot of fun to ride on the Allez. The Fuji flattened out the rough spots. Of course, on asphalt roads, both bikes ride about the same, in my opinion. On really rough roads, that are pocked with potholes, or have uneven, patched pavement, the ride is just as bouncy and jarring in the Fuji as the Allez.

I’ve taken the Fuji on several club rides, as well as rides in my neighborhood on my usual 15, 18, 19, and 27-mile routes. Besides the overall smoother ride, I noticed other things:

The steel bike is heavier. That shouldn’t come as a surprise to anyone, although the proponents of steel frames will tell you that the modern frames are only fractionally heavier than their aluminum or carbon fiber competition. I weighed both the Fuji and the Allez on Casa Niekamp’s bathroom scale (okay, you can draw your own conclusions about the accuracy of the measure!) and found the Fuji weighed a commendale 19.5 pounds. The Allez checked in at 16.5. However, I weighed the Allez without pedals or seat bag, since both had been moved over to the Fuji. So the weight difference might not be that much.

That heavier weight showed itself in two ways: Riding into the wind is tougher. I have to work a lot harder than I do when tackling a headwind on the Fuji than the Allez. But on the plus side, I can go downhill faster in the Fuji. On some favorites in my neighborhood, I noticed a 2 mph speed difference between the two bikes — the Fuji owned those descents. Curiously, I didn’t notice much difference when climbing up hills. The Fuji is responsive, and will answer the pedals promptly.

I think part of the credit for the smoother ride goes to the tires. The 25 mm Michelins on the Fuji recommend a maximum pressure of 102 pounds. I ran them at an even 100. My Allez is currently running 23 mm Vredestein Fortezza SEs, with a pressure range of 115-140 pounds! I run those at 120. The combination of skinnier tires and higher pressures probably has a lot to do with the harshness I sometimes feel on the Allez.

Now, because the Fuji is a borrowed bike, I didn’t do a lot of tweaking to make it fit me. David is about an inch shorter than me, so I did raise the saddle height. His arms are also shorter, and the Fuji sports a short stem. David threw in the original stem, which is about the same size as the one on the Allez, but I didn’t put it on. It turned out I really liked the more upright riding position the short stem gave me. As my time on the bike wore on, I realized that I could clearly see the front wheel’s hub ahead of my handlebars, so I probably should have swapped stems. And whenever I stood on the pedals to accelerate or climb, my knees tended to bump the handlebars, and I was too far forward to climb efficiently.

Overall, I really enjoyed riding the steel bike. For me, comfort is an important criterion for selecting a bike, and the Fuji was the more comfortable of the two bikes. I’m not ready to pull the trigger on a steel bike just yet, however. For me, it didn’t quite live up to its billing as an excellent bike for century rides, and I think anything that can be comfortable for that much time in the saddle would be comfortable for the shorter rides I more commonly do. But fit is everything, and if I could be fitted to a steel-framed bike for maximum comfort, it would certainly be an option to seriously consider.